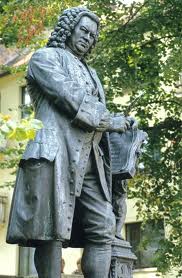 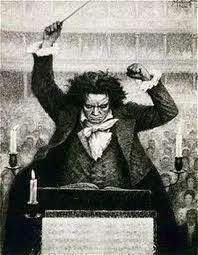 I've postponed it too long. Because I've considered it something of an academic subject which may not interest many of my followers, only now, on my 240th blog, do I talk a little about the two composers who have meant so much to me through at least five decades, one of whose music I can never get enough of listening to, the other who gets into my mind with such force that I actually go out of my way to avoid listening to him, feeling emotionally drained by the experience.

It's a bit odd that J.S.Bach, surely being one of the ultimate 'cerebral' composers does not tire me in the least, even though most of his music appeals on an intellectual level. His music has been called "mathematics in sound" which, I suppose, can be dismissed as absurd, though I think it contains more than a germ of truth.
There is a purity of vision in his compositions, an inevitability and a perfection which I think outdoes every other composer who has ever lived (a point of view that admirers of Mozart would undoubtedly challenge, but which I would maintain). There is practically no composition of his I can think of that could be improved. Yet it is difficult to believe that in the years following his death his worth was not recognised and his fame was far surpassed by several of his composer-sons. It was left to Mendelssohn, a century later, to re-claim him out of the obscurity to which he had sunk and to place him on his rightful pedestal  from where he has towered ever since.

Beethoven, by contrast, is the eternal voice of the human spirit, aspiring for perfection, but never quite getting there. I can hear such greatness in his music while simultaneously recognising the faults in it - and, not only that, but arrogant as it may sound, in my mind I think I know how it could have been even better. While Bach is, for me, the supreme intellectual composer, Beethoven appeals on a combination of the intellectual, spiritual and emotional levels. For this reason, virtually anything by dear Ludwig is such an 'event' that listening attentively to his music simply tires me out.
One of the very first live concerts I ever went to (I would have been maybe 16) was an all-Beethoven programme of the 'Egmont' overture, the 'Emperor' concerto and the 'Eroica' symphony. Not just three 'Es' but the two major works were in the same key of Eb, which by itself would be a challenge! Being so young my tastes and preferences hadn't quite settled yet and I thought the whole experience was wonderful. However, I know full well that I couldn't listen to such a concert these days. I'd feel mentally suffocated after nearly two hours of such passionate intensity!

But these two, for very disparate reasons, are two beings who have given such meaning to my life that I cannot imagine what it would have been like not to have experienced them. If I had to live with one of them to the exclusion of all other composers it would just have to be Bach because he always leaves me wanting more - even though Beethoven may occasionally have the ability to penetrate even deeper.

My own favourite compositions of theirs:-

Bach - Mass in B minor
Christmas Oratorio
St Matthew & St John Passions
Preludes & Fugues - 'Well-tempered Clavier' (both books)
So many of the cantatas, both secular and religious.