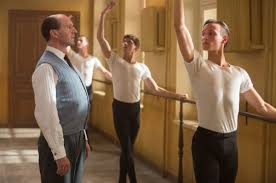 I found this, by and large, pretty good, let down just now and then by some indifferent acting. Considering that it's only the third feature film directed by none other than Ralph Fiennes - who made his directing debut back in 2011 with a highly impressive 'Coriolanus' and who, in this latest film, also takes on a significant acting role - it's another achievement with which he ought to feel well satisfied.

Those of my generation will remember the hullabaloo caused by the defection to the west by Russian ballet dancer Rudolf Nureyev (already by then a world celebrity) while on dance tour with his company visiting Paris and London in 1961. It's at the end of the first leg that he makes the historic break for freedom from his artistically strait-jacketed, Communist-watched, Soviet life . What I recall about it was the news programmes being pulled in two directions, first trying to play down the significance so as not to upset the Soviet Union too much, this being bang in the middle of the Cold War, but at the same time trying to give voice to the sensational nature of the escape which the 'popular' press had picked up on, and which really only came to full light some time later after Nureyev had been made safe and secure in London. No one doubted that his country's leaders wanted him back, but failing that, to have him killed, such was the high anti-Soviet propaganda value he carried.

The film tells of the period before and up to Nureyev's escape (Oleg Ivenko, himself a professional dancer) with flashbacks to his childhood and early dance training in Leningrad, under the tutelage of his enigmatic and softly-spoken dancing instructor (Fiennes).
The mainly subtitled film is mostly in Russian, with some French, though also significant parts in English.
Screenplay is by the gifted David Hare who shows his skill in the spare dialogue he's provided for the quite large cast.

Nureyev's fluid sexuality is more than hinted at, having close 'friends' of both sexes, but still plays on the safe side with nothing graphically explicit. It still came as a bit of a shock (to me, at least) to see the dance instructor's wife make much more than a direct pass at him.

The actual defection scene at the Paris airport is near the film's end and plays out just as if from a Hitchcock thriller with high tension suspense, and is none the worse for being so. Just as the company is about to embark on a plane to London he's pulled aside by the Russian 'heavies' who've been keeping their eyes on him constantly for the whole visit, and told that Soviet leader Nikita Kruschev has ordered him back to Moscow to 'dance in a gala'. He suspects their motive and decides that it's now or never.

It's a film which hardly ever flags, despite its two-hours-plus running time and my knowing how it was going to end. Ralph Fiennes has made a brave move in assembling a largely Russian cast which might be forgiven its occasional wooden moments. Nevertheless, the whole enterprise came out better than I was expecting..............7.