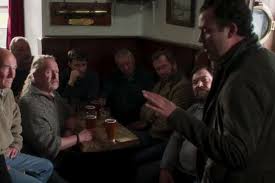 In a quandary whether or not to see this, doubting if I'd give it a fair reception (just not the kind of film I go for!) my mind was made up by the incoming news that it looked like Prime Minister Theresa May could be trying tomorrow for a third time to get her Brexit deal through the House of Commons, with the terrifying prospect that, though still unlikely, she'll pull it off - especially now with the admittedly tastily enticing promise that if it passes she'll stand down and let someone else carry on with trying to keep the ensuing havoc in check. The prospect of a new leader supported by a coterie of Europhobes, some Trump admirers, at least one climate change denier (Liam Fox) and a clutch of anti-gay-equality ministers (though Heaven forbid you should think they could be homophobic, you understand!) depresses me considerably. So I needed some distraction from the dark cloud enveloping me even though there's a fair chance she'll be defeated yet again. Thus going to see this film filled the bill for at least two hours of the waiting time until zero hour tomorrow while I wait with fingers, and everything else that can be crossed, crossed.

Based as most films seem to be these days, on a 'true story', I knew next to nothing about this Cornish ten-fisherman singing group (largely a capella) of the film's title, having around 15 years ago given up on my prior lifetime's assiduous following of the pop charts, in which these fellows made some unlikely, though modest, impression on the (mainly album) charts with their sea-shanties, before which time I was already turning my back on this particular world. So nearly all of this was news to me.

Daniel Mays and three others are on expedition to Cornwall (the most westerly of the British mainland counties, jutting out into the edge of the Atlantic) where he's heard of this group in the little fishing village of Port Isaac (current pop, just over 700) and, having heard them in one song, thinks he can sign them uup for a lucrative recording deal. On arriving in the village their car mistakenly finds itself going the wrong way up a one-way street, inevitably meeting a vehicle coming the 'right' way and driven by a woman (Tuppence Middleton - mainly TV work up to now) with a small girl, who confronts Mays irately. Of course I was just one of many who'd know that here was what would become the film's romantic interest. (Funny how many screen romances are ignited by a squabble! Didn't they realise that very soon they'd be falling for each other?) Anyway that was cringe the first, just one of at least a dozen more ahead.
Before the singing men are 'discovered' we see some of them on their fishing boat doing what they do - and singing! - with the unseen support of instrumental backing creeping in under their voices. Oh dear! But singing extremely ably, I must say - soundtrack provided by the authentic 'Fisherman's Friends' group, of course.

The male actors comprising the group include James Purefoy, looking hunkier and hairier than I've seen him before, who turns out to be (who would have thought it?) the father of the aforementioned Tuppence Middleton character.
When Mays tells the men of his idea of getting a record deal for them their reaction is one of hilarious disbelief, making him show that he's serious. There's much joshing at his expense, stringing him along with tall tales which he falls for while the men laugh up their sleeves at his gullibility.

You can guess the contours the story will follow and you'd be right. We've all seen too many of these tales where an individual or group of performers dismisses the thought that they could have any recognisable talent only for them to be 'discovered' and for them to go onto fame. Usually, though, the person(s) starts as being truly awful and has to work incredibly hard to reach the standard required, which they do to win whatever trophy and even to become a world-beater. In this case it's evident that the group already have a prodigious singing expertise so there's none of that tedious training regime to which we're usually subject.

I'll confess that at several points watching this film felt like an endurance test, so twee was the story. I nearly came close to doing the very unusual of walking out after my self-imposed minimum limit of having seen two-thirds of a film before leaving, to make it count as having been 'seen'. But it must be a few years since I last did that for anything so I sat the complete film out through gritted teeth.

So did I like anything ar all about it? Yes, the singing absolutely - as well as the Cornish landscape/seascape though that was located within the confined area of small Port Isaac.
Acting was fair to good. Script predictable and sometimes weak and unimaginative.

This is director Chris Foggins' second feature film, his first being the ignored 'Kids in Love' of 2016. I didn't notice any special touches which would make this film stand out and be retained in the memory, apart from its built-in unusual subject matter and location.
During the course of watching it I was pretty sure I'd give it a really low-rating based on my very personal individual negative reaction, though I freely admit that there'll be many more who are ready to go along with it and lap it up with enjoyment - and good for them. I can only speak for myself. However, despite my reservations, I've come down on the generous side..............4.