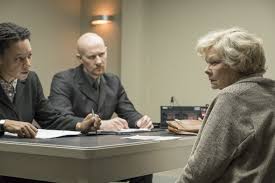 Judi Dench must surely carry the world record for the number of film appearances by any octogenarian actor - eight (so far) at my count - and they've all been in significant roles, while the tally of those she's done since attaining sixty runs into the dozens.

This film, 'inspired' by the real story of one Joan Stanley, tells of the woman's arrest and interrogation just a few years ago following her being belatedly uncovered and suspected of having been a spy around and after World War II, conveying information to the Soviet Union on the building of an atom bomb.

Although Dench gets lead billing in the opening credits, over nine-tenths of the film consists of flashbacks to her younger years starting at Cambridge University  (where her earlier self is played by Sophie Cookson) either when she's being questioned or she's playing through her memories and daydreams, much of it from a romantic angle, including an affair with a hothead communist student (Tom Hughes) and close friendship with a professor (Stephen Campbell More).
Her male student acquaintances are mainly socialist, sympathetic to Stalin and Russia (long before the truth about his tyranny and oppression became widely known). Although she goes to political meetings she resists joining organisations, but then the breaking point for her is when she hears about and is appalled by the dropping of the A-bombs on Hiroshima and Nagasaki. By this time she's working on scientific research and has access to secret information...............

Despite having as director none other than the renowned Trevor Nunn, this film which ought to have been suspenseful, even gripping, turns out to be oddly pedestrian. Dench herself is very moving and totally credible as a delicate, senile woman, but the major part of the film featuring her younger self I found not as involving as it ought to have been. Perhaps the fault lies in its pacing. It doesn't help in there being multiple (too many?) returns to the present before jumping back to the past, as though fulfilling a need to give Dench more screen time, when that really wasn't necessary.

When it comes to standard of acting, any appearance by Dench is a guarantee of conviction. Sophie Cookson and her male co-support actors are pretty good too, but it all doesn't seem to redeem the film itself from being on the plodding side.
Though the story is completely new to me this film doesn't exactly make me want to find out any more about it..............6.