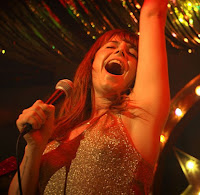 I do have a marked antipathy to this genre of film, having seen so many over the years follow the same tired old 'Star-is-Born- with-tweaks' formula (budding young singer with unrecognised talent or limited appreciation of same on a quest to 'make it big') such that I spent a good portion of my viewing time sitting and fuming, wishing it was over with. This was only the latest of them which, I have to point out, has actually received almost universal plaudits, so what do I know?
Why did I go at all? Simply to boost my cinema-going number so I can reach the magical 5,000 and take my foot off the accelerator by starting to see only those films I really want to see. Besides, I had a chance for a cheapo ticket so there wasn't much to lose, apart from another two-hour hole in my life.

Irish actress/singer Jessie Buckley got her name into celebrity status (though it meant nothing to me) by coming second in a BBC TV talent show a few years ago. In this film she plays a Glaswegian country music (emphatically without the appendage of '.....and western') singer, Rose-Lynn, who feels that she ought to have been American and dreams of visiting and performing at Nashville's, 'Grand Ole Opry', effectively her 'Mecca'.  As the film starts, she, a single mother of two infants who've been living with her own no-nonsense mother (Julie Walters), is released after one year in prison for drug possession, and returns to her children. However, knowing that she has to find a means to support herself she has again to palm off her resenting kids and she finds a housekeeping job with a relatively well-off and kindly suburban housewife (Sophie Okenado - for me the best thing in the film) living with her own husband and her own two children. Rose has a brash, rather immature personality, tough as old boots on the outside but (wouldn't you know it?) soft and vulnerable underneath. She's ever got her earphones on and is not averse to some hard drinking, and singing at Glasgow's own country music pub.

You can guess the line the story follows, but you'd only be partly  right - for example, at one late stage her criminal past proves to be  a spanner in the works of her dreams.

One of the worst aspects for me was the very pronounced Scottish accents. I really could have used subtitles. In fact I scarcely picked up a single word in the first 15 mins. Talk about frustrating! And it goes on throughout, whole stretches of it. At least Julie Walter's Scottish accent was decipherable, while Sophie Okenado had no discernible accent at all.

This looks like director Tom Harper's fourth cinema feature film. None of his previous has set the critics alight. Looks like this is his first notable success. Good luck to his future.

During the film I removed my eyes from the screen periodically for the simple reason that I just couldn't be bothered to take interest. Looking at my watch was more fun!

You'd be right in surmising that there's a fair bit of singing in the film though only one complete song, I think. I can tolerate country music with ease, in fact I find a lot of it quite pleasant, but here it's the story wrapped round it that made me suffer.
Most, or nearly all of you, will be younger than I am, so probably not having seen so many of this 'type' of film you may well be more taken up by the story than I was, in which case do go. But laying my own hand down for all to see, I've had just about enough!................4.