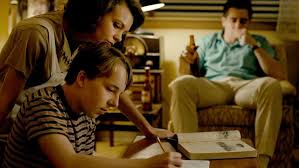 Actor Paul Dano, 34, debuts as director in this modestly scaled domestic tale, with the guaranteed high standard participation of Jake Gyllenhall and Carey Mulligan playing a married couple trying desperately to make ends meet whilst supporting their teenage son's education, the latter being played by Ed Oxenbould (who, incidentally shares little facial resemblance to either of his 'parents', but that's not a great distraction).

Filmed in smalltown Montana (set in the 1960s?), the father is fired from his subservient job and, rather than re-taking his post when asked to return, follows his pride and takes another lowly one paying a pittance, as forest fire-extinguisher in a gang putting out those blazes purposely set off for environmental reasons, and which involves his staying away from home for days at a time. An unholy row ensues when he tells his wife, she because of the danger to him, but also for the fact that the family income will be significantly less than previous. To assist finances she takes up swimming instructions for adult classes. The son looks on bewildered, not sure where his own allegiance lies.

This occupies the first half of the film where, I must confess, I felt that its failure to arrest me sufficiently to the point where I'd be wondering what happens next, made me think it was all getting perilously inert. However, this changes considerably when the boy starts getting suspicions about his mother's attentions wandering towards one of the members of her swimming class, a quite significantly older, now single, man (Bill Camp), only to have his worst fears confirmed.
Up to this point, the boy had been a somewhat peripheral character present during his parents' heated exchanges. Now he takes a central role, with at least equal screen time with the other two, perhaps even more, and he plays the part impressively.

The film didn't move me as much as it has many other reviewers (and audience, as evidenced from average ratings on two other sites, shown below), though I do think it's a more than respectable beginning if Paul Dano continues his directing, which I hope he does after this promising start. I can't imagine many classing it as a 'poor' film. It just isn't one that, despite the starry couple at the head of the cast, is going to linger in my memory for very long.............6.