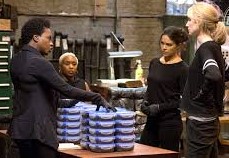 Highly effective and tense heist thriller directed by the now justifiably renowned Steve McQueen, each of whose past full-length features (and there have only been three of them to date), have been remarkable in their own ways - '12 Years a Slave', 'Hunger' &  'Shame'. Now here, with his fourth, he does it again.

Based on (so I read) a late-1970s British TV serial by Lynda La Plante set in London, the action is here transferred to present day Chicago.
In the opening minutes we see a robbery in its late stages with four criminals led by Liam Neeson attempting a getaway, only to be confronted by police forces awaiting them, and perishing when their van, with the loot in back, goes up in flames, destroying everything inside.
Viola Davis, playing Neeson's widow, innocent of all knowledge of the robbery - and nearly always carrying around or has on a lead a small, white Scottish Terrier  (No, it was actually a West Highland terrier, as pointed out by JayGee in comments below!) - she is 'visited' by a stranger who menaces her by giving her one month to make up the money his gang has lost. Quite why the robbery was enacted in the first place is not clear, suffice to say that the money route leads back to a corrupt mayor (Colin Farrell) on the eve of what he hopes is his re-election as the latest in a dynasty of mayors, with his ageing and disapproving father (Robert Duvall) ever hovering over.
One of the pieces that Davis' husband had left behind was details of another planned heist, and Davis has to convince two of the other widows (Michelle Rodriguez,  Molly Kunz) following the same tragedy, to join her in saving her skin by acquiring money to give to the gang, whose leader (Daniel Kaluuya ('Get Out', 'Black Panther') is particularly terrifying. She ropes in a fourth, Elizabeth Debicki, as driver to complete the all-female criminal quartet.

The premise of the film is a good, unusual one which could have gone cheesy, but it doesn't. Likewise one might expect there to have been some scope for a few grim laughs, but there's none.

What needs must be mentioned is that there's quite a degree of sudden, heightened violence throughout the film which made me wince on each occasion, those moments coming as they do so unexpectedly. Also, about two-thirds through there's a breathtaking twist in the tale.

Although it's a very tense film I was put on further edge worrying about the fate of the dog which appears in a number of scenes, especially since the owner, Viola Davis, is being pressured to produce the money. For those who share my nervousness regarding animals on screen I can report that, apart from a brief moment when the dog is roughly lifted by the scruff of the neck, it doesn't come to any harm.

This film may turn out to be slightly less well regarded than McQueen's other works but it's far better than most in this genre. A rather strong stomach may be needed for some scenes though there's little over-dwelling on the bloody episodes. If you think you can handle it, it gets my clear thumbs-up.................7.