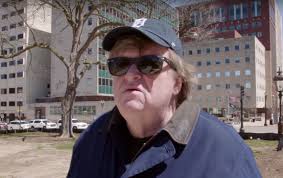 The film's title referring to the date of the last American Presidential election, this could well be the scariest film I've seen all year.

Now we all know that Michael Moore is a major scourge of the American right, but I'm also aware that he has significant enemies on the progressive/liberal side too, and in this documentary he pulls no punches when lashing out at whoever has riled or still riles him, including former Presidents Clinton and Obama. However, his general bete noire is, essentially, the entire political 'establishment' which is in hock to corporate money and thus having a widespread likelihood towards corruption.
I will say this, even if there are no arguments stated here against Moore's own standpoints, he makes his reasons for targetting certain individuals so crystal clear that it's hard to resist cheering him on.

I've seen all Moore's theatrically-released (in the U.K.) documentaries going right back to 'Roger and Me' in (crikey!) 1989, followed by 'Bowling for Columbine', 'Fahrenheit 9/11' and 'Sicko'  - though not 'Michael Moore in Tr*mpland', which wasn't released here. Those I have seen were all eye-openers for me, and though this one didn't say much new in a generally-speaking sense, there is some newsreel footage I hadn't seen before, plus all the interviews he does. (Something I did learn was the origin of the word 'redneck').

The thrust of the film is to examine how it happened that the present White House incumbent managed to get there. and I think Moore makes a convincing stab to reveal just how he did, and the forces that worked in his favour when all pundits (apart from Moore himself) were saying that it wasn't going to happen.
He doesn't speak directly about the man himself through large parts of the film, major excursions from the main subject being the water-poisoning in Flint, Michigan (also the subject of his 'Roger and Me' film of almost 30 years ago) as well as the issue of gun-control, with the young kids, too young to vote, mobilising themselves to pile pressure on politicians for a tightening of gun legislation, and the gun lobby hell-bent on fighting any change. Both these issues can be guaranteed to want to make any reasonable person throw their hands up in despair that any meaningful change at all will come.

He brings out the Hitler/Tr*mp analogy to chilling effect, to the extent that expecting political change, with the system that the U.S.A. has is, if not near hopeless, will be a super-Herculean task to achieve. It will need a will to do it and that, it seems, is manifestly lacking right now.

This is a bleak film, very thought-provoking, and I do believe Moore has done a first-rate job in drawing disparate strands together to make a thoroughly convincing case for change.

It's well nigh impossible that many of Moore's innumerable detractors will watch this film, but I do wish they would, and I'd also like to see their replies to his attacks, with them sticking to the issues rather than resorting to demeaning him personally.

I was expecting that, now with the mid-term elections out of the way, this film might have lost some of its steam by now, but it hasn't. I was seriously toying with not bothering to go for that very reason, but pleased that I did. High recommendation..................7.