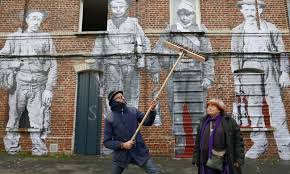 Quaintly likeable, oddball French document-ary in which an unlikely pair - muralist and photographer known as J.R. with veteran Belgian film director Agnes Varda - travel around to various locations in  (northern only?) France together, pasting up giant photos of people on the exterior walls of buildings (some due for demolition, others still inhabited), ship containers, railway tanks and so on. He is mid-30s, she now 90 and relatively spry for her age despite showing unsurprising signs of tiring (the film was completed 18 months ago).

It's not so much a documentary as a recording of their verbal exchanges, arguing lightly about the artwork they are trying to create and she briefly reminiscing about her film career, he giving little away of himself and tetchily refusing to take off his dark glasses so that she can see his eyes through her own progressively blurring vision.
They go to a small town, a farm (specifically a goat farm), a deserted and crumbling half-built small village, a deserted beach, and the docks of Le Havre where photos of willing people living nearby are taken in J.R.s van/photo booth when he then massively enlarges the images to plaster on the sides of chosen walls as their uncredited piece of art - with a vaguely similar motivation to Banksy, I suppose, though here without any political dimension.

The two of them share the film's directing honours and have created an interesting piece of work which, though hardly a 'trailblazer'.  and is not likely to be seen by many, nevertheless manages to secure a pleasant enough way to spend an hour and a half of your time..............6.