Film: 'The Girl in the Spider's Web' 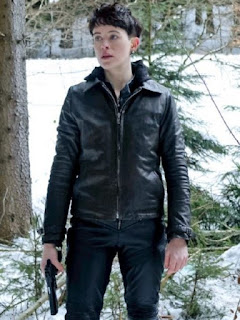 Claire Foy, the ever-glum Mrs Neil Armstrong in the very recent 'First Man', here takes over the mantle of Lisbeth Salander in this latest addition to the 'Girl with the Dragon Tattoo' series of films - and she makes a fair stab at it without setting the world alight - though can'r say I relish the thought of having to sit through another of these with their trademark deeply unpleasant violence.

This time the film is based on a novel from David Lagercrantz using characters created by the late Stieg Larsson, the snow-laden Stockholm location once again providing the backdrop for the familiar topics of incest, vengeance, double-crossings, chases, gunfights (where all the  baddies are hopeless shots, unlike the female protagonist who's deadly accurate every time) with the usual workings 'outside the law' to the extreme displeasure of the police - and here also involving sibling rivalry/hostility and the targetting for kidnap of a young nerdy boy who's as proficient with computers (well, they can all operate at the speed of light!) as he is at chess.
Despite being such a heady mix there's a pervading ho-hum feeling of deja vu throughout, which left me wanting something more and a bit different, and which it just doesn't deliver.

Much of the cast, judging from their names, are probably Swedish. Apart from Foy herself, the only other name I recognised was Stephen Merchant (best known to British audiences as sidekick to Ricky Gervais in his TV series) here playing, for the first time in my seeing, a serious role.
Others include Sverrir Gudnason as journalist Mikael Blomkvist who played a major part in the original trilogy of books and their films - and Sylvia Hoeks as Salander's arch-nemesis sister.

Director is Uruguayan Fede Alvarez who does precisely what you expect him to with reasonable flair, though nothing more.

I've read the original Stieg Larsson trilogy and seen those three Swedish films as well as the American re-make of 'Dragon Tattoo', the latter though not having quite the bite of the European original version wasn't too bad either. This new one, which didn't engage me at anything like the level of those four films, I wouldn't put in quite the same class, though it's not totally dull either.....................5.5.