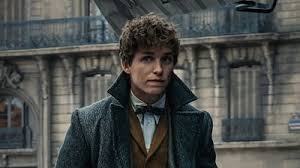 There have been warnings galore that this was going to be a "What the dickens is going on?" film, which sums it up perfectly. I didn't even attempt to follow or comprehend all the maze of info and mumbo-jumbo designed to get you involved because, frankly, I couldn't care. I only went because I'd heard that the visuals were superlative, which is true. (Just where can they go from here? Surely the end of the road has been reached for this aspect!). But at 2.25 hours the film is far, far too long for its own good - and the final 40 mins or so is interminable, with an albino-ed Johnny Depp allowed to dominate proceedings as the titular and evil Grindelwald - something I'd assumed was a place!
Btw: Why do captions always have to announce such as 'London, England' and 'Paris, France') Yet when it comes to American cities their country of location is not stated. Of course we all know of London, Ontario and Paris, Texas though those places can hardly be confused with the European metropolitans. I can't believe [most] Americans are that dumb!

Eddie Redmayne reprises his role as Newt Scamander (Saviour of the world!) - and has the heavyweight casting of Jude Law as the young Dumbledore in his early time at Hogwarts.
The only other name in the cast I recognised was Hugh Quarshie, now an established TV regular, whom I regularly used to see on stage in a variety of roles at the Oxford Playhouse when I moved to that city, and when he was a mere stripling of 20 or so,

To call the plot of this labyrinthine would not be unfair. How many of the audience who are not familiar with the J.K. Rowling books would be able to explain it? And how many who have read them could do likewise? Who other than keen Rowling aficianados would even care to spend time reading such? Not me! My time left may be too restricted to have the luxury of bothering with stuff like this.

Director David Yates has already made four of the Harry Potters so there's no doubting that he knows his business - and he manages it all with the proficiency one would expect. However, I do wish he, and indeed Rowling herself, had created a product here where we are involved enough with what's going on so that we, at least speaking for myself, don't feel bored to tears.

I was going to rate this with a '3', but my kinder side is winning out, so I'd better post this quickly before I revert to my initial thoughts..........4.