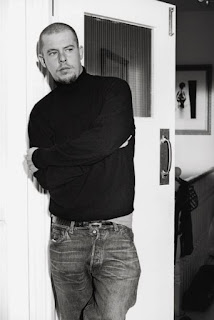 Not knowing much about, nor even caring about, the world of women's, or any other, fashion, the name of (Lee) Alexander McQueen had been a feeble bleep on my radar of awareness - at least until his suicide in 2010 at the tragically young age of 40 (and on the eve of his own mother's funeral whom he'd adored). So this documentary was destined to be an education for me as much as anything else.

Lots of footage of talk by members of his immediate and extended family, his former relationships, professionals he'd worked with and fashion celebrities who'd known him - all intercut with film of many of his catwalk fashion shows.
I knew about his reputation for the outrageous, and his creations shown here don't disappoint in that aspect - though I have to say that I just don't 'get' him, thus my being nonplussed by all the fuss over them.
The catwalk exhibitions are less advertisements of what one might want to wear than a series of tableaux, usually modelled in singles, sometimes in groups.
It may be obvious, but I have to assume that none of his costumes are seriously designed to be worn. Even if someone wishes to create a sensation in, say, a nightclub, it's a very transitory thing - once seen one doesn't especially long to see it again, and the person sporting such uncomfortable costume must be hoping that they don't again bump into someone who's already viewed it. I'd have thought that once worn it may as well be binned - often the material used is very basic anyway.

McQueen's determination to succeed at what he liked to do manifested at an early age in London (to his father's displeasure) and he could be rude in his convictions and single-mindedness - as well as giving rise to worries over his dabbling in drugs, specifically cocaine.
His suicide (by hanging) was hinted at before the event, though not when and how - and when it did come it was a shock that reverberated through the fashion world.

You may accurately guess that I just don't appreciate this wunderkind of the fashion world. A genius? I must give way to more knowledgeable opinions than mine while I put my own view in suspension. Reviews I've seen, and ratings I quote below, tell me that I'm out on a limb on this one, though that's hardly anything new.
But it's by no means a dull film. McQueen's boyish charm and exuberance comes over time and time again, though as for anyone who crossed swords with him, it's easy to see who would come out on top. And whatever one thinks of McQueen, one has to conclude that his premature demise was a very sad and needless waste......6.
( Imdb.........9 / Rotten Tomatoes.........8 )