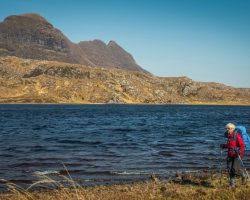 Were it not for my having depressed expectations for this, I may well have found it less satisfying than I actually did.

Sheila Hancock, a regular on British TV in years past plus a few films, and still appearing in theatre and on radio (and, incidentally, widow of the late John Thaw, best known, perhaps, for being 'Inspector Morse'), plays an 83-year old who, when clearing out old stuff following the death of her husband, comes across an old postcard sent from Scotland featuring a picture of the imposing Mount Suilvan on the far north of the Scottish mainland. She determines to travel up all the way from London and to climb it - alone.

Most of the film is set in the unspoilt, breathtaking, rocky and heathen grandeur of this area - and for me this aspect carries the film. There aren't that many films made in this location and it's here used in glorious fashion. The unusually shaped 'mountain' is, in fact, less than 2,500 feet high though its steep sides make it a genuine climbing challenge - more arduous, especially for someone of Hancock's age, than perilous.

Edie (Hancock), on her arrival by train at Inverness, immediately meets by accident a young man (Kevin Guthrie), about one third of her age, and it's agreed that he will offer his paid services as driver, climbing expert and companion (up to a point). You can easily guess that their relationship will go through the usual stages - cordial, argumentative, some lighter moments, some cool, some accidents - you know, the oft-employed formula.

Director Simon Hunter keep things moving with no great surprises, though it always remains watchable.
It hardly needs saying that the film is essentially a vehicle for Sheila Hancock (whom I've seen live on stage a couple of times), who here does all her own film work - no body-double employed for the climbing scenes, and she fills the role with all the satisfaction one would expect from such a veteran as herself.