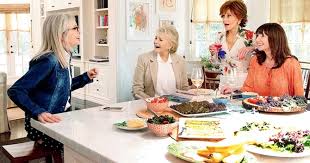 Well, at least I gave it a chance!
My interest in this had been hovering between near-moderate and minimal anyway, but in the course of its hour and three-quarters it was seriously flagging several times.
The novelty that carries it is, of course, the chance of seeing four, now veteran, actresses, on screen together in ensemble - Diane Keaton, Candice Bergen, Jane Fonda and Mary Steenburgen. The pretext is their having organised a book club just amongst themselves, and the chosen reading for the purposes of this film is E.L.James' 2011 novel 'Fifty Shades of Grey' - a book apparently so erotic (pah!) that it'll spice up the lives of these four ladies and get them panting for sex in next to no time. No matter if there's no man in their lives at present, they'll want to search one out and bed him. Anyone who reads extensively and has read this 'oeuvre' of Ms James will be as aghast as I was that it could in any way be considered as the catalyst that gets anyone rooting for sexual fulfilment more than any other book available. Anyway, one has to accept it as a conceit on which this film depends - that book getting little more than a very few mentions anyway.

The men involved are Andy Garcia, Craig T. Nelson and Ed Begley Jr, with cameo appearances from Richard Dreyfuss and a disappointingly short one from Wallace Shawn, whose rare on-screen appearances are all exceedingly welcome for me.

We see the women together discussing their respective situations, Candice Bergen being the one most actively searching for a date, whilst the others have either just met a man or is already 'involved' (in a sense, in one case).

It's a gentle 'comedy' (I use the word advisedly), intending to be personable and fluffy - and it just about qualifies as both of these - yet I know I'm going to find it supremely forgettable.
There are moments which are supposed to be ones of high hilarity, and some of the audience I was with thought they were, but I was, for the most part, left unmoved. Even the Viagra episode, which some members of the audience thought was the funniest thing ever put on screen, raised no more than the merest ghost of a smile with me.

It seems to be director (and co-writer) Bill Holderman's first feature-length film. So he's cut his teeth on this one. Let's see what else he can do.

I'd say that this is a film to watch only if you've got nothing better on, though I'm aware that there are some who'd rate it considerably higher than that. It's surely pleasant enough, though only just, but I'd find it hard to think that it would set most people's interest alight, which is also what most of the reviews I've seen opine........4.