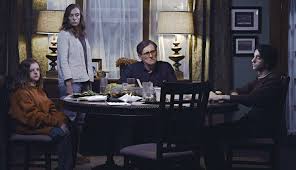 I'd had serious doubts of whether I ought to subject myself to this, regarded by some as the new 'Exorcist' - and that latter film had scared the bejesus out of me back in 1973. In the event, concern was needless as I didn't find 'Hereditary' anything like as special as some have claimed it is. I'm not expecting to have difficulty in sleeping tonight, which I absolutely did have after the earlier release.

This is very much a film of two halves, the first hour I found pretty good, even very. Adroitly managed restraint is always more effective than going hell-for-leather with special effects. When everything starts getting thrown in, as though the idea is that the more one is shown the more one will be frightened out of one's wits (always indicating desperation, to my mind) it rapidly undoes the positives of what had gone before. I even found myself having to stifle a smile at the daftness of it all.

Toni Collette dominates the film as a dolls-house creator and mother in a family of four, with taciturn hubby (Gabriel Byrne) and their two teenage children (Alex Wolff and Milly Shapiro). There are already simmering tensions in the family but when an horrific accident happens, the effect on her life in particular allows her to act as progressively more and more unhinged, particularly after she meets an older woman (Ann Dowd) who's suffered a bereavement and has experienced contact with 'the other side'.
Incidentally, the family has a pet dog (something which always makes me extra nervous) but as the story advances the dog becomes less and less in evidence until it seems to be just written out of the story with no explanation. I'm not complaining.

That first half which I'd admired so much was skilfully manouevre'd, the suspense before anything had even happened being underlined by a most effective soundtrack score of a bass hum or a low throbbing sound. Shame that the expertly built-up tension is not sustained and as more and more is revealed the plot and its on-screen manifestation gets too haywire for words - until, (spoiler alert for what's coming up! - or jump to next para) as a crowning glory, and a hopeless error made in attempting to put some rationale under the happenings by giving it a mumbo-jumbo conclusion relating to Egyptian(?) mythic history - at least I think that was what it was supposed to be.

It really was a grave mistake to try to explain what it was all about. Would have been immeasurably better to have left it open. We're not so stupid as to be taken in by a fiction of cod-reasoning which, instead of clarifying, succeeds only in obfuscating matters. Dear me!

Apparently this is Ari Aster's first full-length feature as director. The first hour or so indicates that he does demonstrate some promise. If only he becomes aware of when to rein himself in he may well have better things ahead.
Toni Collette gives the film her all, and there's an awful lot of 'all' in it. I can't deny there was an element of fun in seeing her completely lose her marbles. As for the remainder of the second half, no thanks............5.