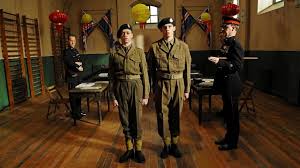 John Boorman will be on many people's list of the most distinguished film directors Britain has ever produced.
It may sound mean, but he was never one of my own favourites, finding many of his films hollow or meandering or unconvincing or all three. So it also seems in this one which, if the very final shot is anything to go by, is to be the 82 year-old's swan song.

Boorman's C.V. as director contains a number of films which a lot will remember, not without some affection - 'Point Blank' (1967), 'Deliverance' (72), 'Zardoz' (74), Excalibur' (81) and 'The Emerald Forest' (85). Indeed, some will go so far as to call one or two of these 'masterpieces'. I did quite like 'Point Blank' and was fairly impressed with 'Deliverance', but after that I felt it was downhill all the rest of the way.

This latest (and presumabl, last) is a belated sequel to his 'Hope and Glory' of 1987. The young boy, Bill, in that earlier film, (identifiably Boorman himself as a child in wartime London) is now 18 (and played here by Callum Turner) and he's conscripted for two years compulsory army service. The date is 1952 and the Korean War has begun - though he doesn't actually get to be posted there. Conscripted with him is Percy (Caleb Landry Jones) whom he befriends and they jointly get up to the usual juvenile larks during training, near-the-edge insubordination and chasing after girls when they get the chance outside camp. Nothing really unexpected or outrageous here. In fact I was frequently wondering "Where is this going?" and "Why should we be bothered?" I was looking at my watch almost as much as I was watching the screen. Okay, that's an exaggeration, but it did try my patience.
Better known names in the cast are David Thewlis (excellent) as the two army buddies' immediate superior, Richard E.Grant as a humourless, rather world-weary Major (good to see him in a part where he's not required to smile), and Sinead Cusack as Bill's mother.

The film contained one of those elements that irk me the most - insistent background music. It just would not let go for hardly any stretch at all, as though the audience needed to be guided to feel anything, which may have been good if it hadn't been so annoying. For goodness sake! Why didn't they think of putting a sock in it?

One curiosity of chronology - the film starts in 1952 with King George on the throne. We all know that he died in February of that year. Yet the moment when he does expire, by then the film is already halfway through. After the flag is lowered out of respect, Private Bill is off on leave to visit his parents. While there the family acquires a television specifically in order to watch the upcoming coronation of Queen Elizabeth. But there was actually an almost sixteen month interval between the death of the king and the crowning of his successor. So where, in this film, did all that time go? It's true that when Bill returns to army life he's risen in the ranks, but no other indication is made of what happened to that well over one year period, more than half of his actual service time! Very strange!
He returns to more talk about the Korean War - the other 'big' event being the mysterious disappearance of the regimental clock. Honestly, I ask you! Are we supposed to care?