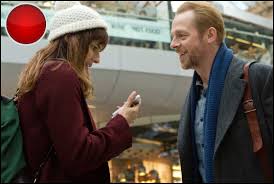 I like Simon Pegg a lot. If he hadn't been the main player in this rom-com I would have let it pass by.
He's at his best when in rat-a-tat-tat delivery, and here he's allowed his head with a pretty good script (by Tess Morris) which sounds extemporised.

The premise of the film requires a considerable leap of faith. He mistakes a 30-something lady for his blind date of ten years younger (and this is only the beginning!) when she, unable to get a word in edgeways, decides to play along and makes out that, yes, she is indeed the very date he was supposed to meet - and that despite her having a speech prepared for a celebratory party she was due to attend that same evening, she goes off with this total stranger. Just imagine going with a man totally unknown to you who's making a strong come-on. Unthinkable isn't it? (Good job you can't see my blushes.) So here they are, visiting bars, a restaurant, bowling alley.........However, it's not too long before the unfortunate appearance of a former male school colleague of hers, and now with a disturbing fixation on her, makes her admit the truth of who she is to her 'date'. Arguments develop - but can you guess where it's going to end up? Yes, that's right - they find that they're mutually smitten. (Btw: This is not a plot-spoiler - as if it could be! - it's contained within the first sentence of the publicity blurb.) So - after the set-up idea the film follows a predictable path but it's kept interesting because of some lively acting and that script which fizzes along.

Simon Pegg's female foil is one Lake Bell, a name I didn't know though I see that she's appeared in a number of films (none of which I've seen) as well as quite a lot of TV work. Here she gives as good as she gets, at least when she's allowed to speak, which she certainly is after the opening scene. It's said that during filming the crew assumed that she was English and that only after shooting, when she reverted to her normal accent, did they discover that she was American. She is particularly good in this.

Rory Kinnear is the obnoxious ex-chum who just doesn't get the message that the lady feels no attraction towards him. He just will not give up, even when knowing the circumstance she is in.

The entire action takes place during the one evening. We are, thankfully, spared any bedroom or sex scenes, which would have felt out of place here anyway. Unfortunately the film does end on a ghastly note of intense sentimentality, even with large numbers witnessing and applauding the couple's declared affection for each other - the classic 'feel-good' ending. But that was really my only major reservation, and director Ben Palmer keeps it all moving forward nicely.


When Simon Pegg plays these talkative characters I never tire of listening to him, though I can't pin down why. (Hugh Grant I also find a compelling watch for much the same reason.) Pegg's appearances in the 'Cornetto' comedy trilogy were similarly attractive to me - maybe less so when he plays in the 'Star Trek' and 'Mission Impossible' films.

If you share my liking for Simon Pegg my rating for this film will, I hope, make you interested enough to see it. If you are indifferent, or have an antipathy towards him, you will have to reduce my score accordingly......................6.