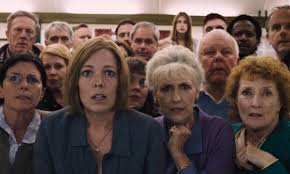 Not only have reviews of this unusual film been largely very positive, but some critics have been overloading superlatives into their columns. In consequence I feel that although I did like it, I ought to have been more enthused. However, no one can deny that it's a singular achievement.

It's based on a successful stage play of a 2006 actual news story involving a serial killer in Ipswich (medium-sized town about 80 miles north-east of London) who picks five prostitutes as his victims. The play uses the real words employed by members of the public in the locality (the road of the film's title) in newsreel interviews and - arguably with some risk concerning the seriousness of the subject matter - it sets them to music.
The cast is largely of little or complete unknowns, save for Olivia Colman, Anita Dobson (a long-time fixture of one of this country's most popular soaps) and, in not much more than a cameo role, a star of no less stature than Tom Hardy, appearing for five minutes or less as a taxi driver.

The 'music' that the cast speak, lilt or sing to, in singles, doubles or in ensemble - much of it direct to camera as if in interview -  is determined by the inflections and stresses of the actual spoken words used in interviews of the time - some of the content of which is quite shocking, being 'gut-feelings' spontaneously expressed. Whereas in true musicals the shape and stress of the lyrics is determined by the music it lies alongside, here the reverse happens - the lyrics (without rhyme, of course, unless a line or word is being repeated) shape the music. None of the 'melodies' (such as they are) are particularly memorable, but it wasn't meant to be that way. It's almost entirely a sung-through affair, though often the speaking voice gradually transforms itself into a singing one, so it's nothing like 'Les Mis' or 'Sweeney Todd'. Neither is the singing anything like Rex Harrison's 'Talking on Pitch'. When the cast rise into song they really let rip.

The story covers the time when the last of the victims was found, the surrounding area's residents already nervous and suspicious of everybody else due to multiple news items and warnings to be cautious, and on to the suspect being apprehended and, seen from the outside through TV news reports, his trial and conviction - and in a final flourish, onto the all-round relief and attempt of London Road residents to reclaim the area's reputation in appropriately flamboyant manner.

It certainly held my attention all the way, because one was hanging onto every word uttered through song, all of which was admirably clearly enunciated. So why didn't I like it more? (Director: Rufus Norris). I find it hard to pin down exactly. I would imagine that in the theatre the piece would have significantly more bite. By its nature it's very piecemeal, jumping from character to character - and it would take a heart of stone not to feel for some of the surviving prostitutes we see. One of the characters displays possession of such a heart - though I must ask myself how I'd be feeling if prostitutes operated in the area in which I lived, and left behind evidence of their 'work'.

Those who remember 'Les Parapluies de Cherbourg' of 1964 will get the  idea of the nature of this type of sung-through film. I seem to recall that only a few years ago there was another one which tried the same thing but I just cannot recall the title.
I can't help feeling that although we'll always recall 'The Cherbourg Umbrellas', after fifty years we may find it harder to remember 'London Road'..........................6.5
Posted by Raybeard at 08:58