Film: 'The Age of Adaline' 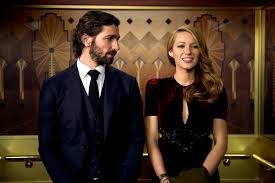 Since circumstances have, to a large extent, taken away my ability to see those films I really want to see while being aware that many of those I'd have chosen are passing me by unseen, I'm left with either viewing those I'm served up with or not bothering at all.
I could tell from the trailer that this was not going to be 'my type' of film (an otherwise routine romance, though with a strange, unique twist), and so it transpired to be. But having the chance to see it on a morning matinee cheapo ticket, well, buggers can't be choosers, so off I went.

The premise of the story is that, due to a combination of events and natural phenomena in 1930s San Francisco, a woman (Blake Lively) in her late 20s stops physically ageing and goes through ensuing decades right up to the present day with this blessing/curse of eternal youth. Okay, I can go along with that. But when, halfway through the film, she meets the father of her current date (Michael Huisman), it was a case of "Aw, come on! Can the world really be that small!" Harrison Ford, playing the father, is actually given a part with considerable depth, and he's really good in it. In fact, he is one of the few saving graces of the film, another being the presence of Ellen Burstyn as the daughter of the titular Adaline, though seemingly to be about three times as old as her mother.
Btw: Why is that it is only very rarely that find it hard to make out what more 'mature' actors are saying - these latter two mentioned players being prime examples of how to do it properly - whereas so many of the current younger set speak in such a lazy manner, near to the point of disgrace. In this film I was several times left wondering why those to whom Lively was speaking didn't reply "Pardon? What did you say?". One would think that the director (Lee T. Krieger) would have asked her to do a retake, but of course he knows what the words are, so that's all that matters, isn't it?.

The film is shot virtually entirely in San Francisco, that most photogenic of cities that it's always a pleasure to see on the screen, and the views we get of it here do it justice.

Another plus for me was the non-intrusive nature of any background score. Was there, in fact, any at all? I didn't notice.

I've gone thus far without saying a single word about the appearance of the male lead in the person of Dutch-born Michael Huisman. So here's a single word - Phwarrrrrrrrrrrr!