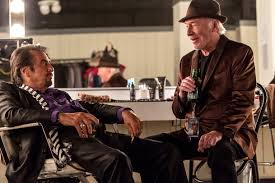 From the trailer this looked like it might be fun. Well, for some of it it was but, alas, it was stymied by a heavily sentimental strand at its heart, requiring the ever-interesting Al Pacino to perform a role that he's only very rarely touched on (if ever!) in previous performances and which, here, he looked less than convincing in, namely that of caring father to the family of his estranged and never-before-seen, now middle-aged, antagonistic son with an advanced-pregnant wife, not to mention their insufferably forward six-year old daughter whose annoying presence would have been immeasurably improved by the judicious application of a damn good slap.

I am, however, glad to report that the weighty proceedings are significantly lifted whenever the admirable Annette Bening appears on screen (which is often), as an hotel manager with whom Pacino flirts unashamedly. There's a significant amount of pleasing banter between them. Even when the conversations between these two get to more serious subjects it's still interesting, which is more than can be said for some of the other interchanges.
Pacino himself is a three-times married rock star of yesteryear, where drinks and drugs figured, and continues to cast shadows. He's still performing occasional public concerts singing his 'hits' of old, and he's still managed, forty years on, by Christopher Plummer. I wasn't quite sure how much of Plummer's doddery act was put on as being in the character of the man he was portraying, or was it part of Plummer the man as he's become? Of course I want to think it was the former.

Roughly based on a true story, it tells how, in 1971, John Lennon, whom Danny Collins (Pacino) worshipped, read an interview Collins had given and was impressed enough to write to him c/o the magazine in which it appeared, suggesting that they talk further, only Lennon's letter to have been withheld from the imterviewee's awareness, he now being told of it forty years later, to his dismay. This provides the excuse for nearly all the background music to the film being of Lennon (post-Beatles) songs. Unfortunately they are all only snippets, some very brief, which was a shame.

The cloyingly sentimental aspect I refer to at the start of this post is that there is a serious health issue affecting one of the members of Collins' son's family, and which the Pacino character takes an active part to try to alleviate. This tilted the film's whole centre of gravity to an ill-fitting seriousness, at least one that is at odds to what I was expecting.

This is writer Dan Fogelman's first film as director, which he achieves with fair enough results. Perhaps I should have been more open-minded to there being light and shade in the story. I was hoping for something enjoyably frothy throughout rather than it being so just in patches..........................5.5
Posted by Raybeard at 08:13