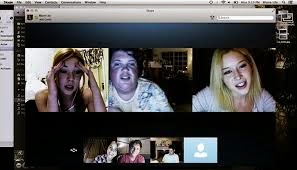 I'd half-expected that an entire film showing nothing but a computer screen was going to be a tall order to sit through, even if only 83 mins long as this one is. As it turned out, this modest horror feature was quite chillingly effective.

Half a dozen brattish kids of late-teenage years hook up to chat via their computer screens (all very free in employing frequent sexual expletives in their dialogue, of course)  in the wake of one of their female friends having committed suicide as a result of being goaded on to do so by someone initially unidentified, each of the six claiming innocence of any involvement. A mysterious interloper logs into their conversation using the Facebook identity of the deceased, only typing his/her(?) contributions, while the others use both voice and keyboard. They can not only not identify this person using all the means available to computer whizz-kids that some of them are, but they can't shut out or get rid of him/her either (the 'Unfriended' of the film's title). The mysterious presence gradually gets more menacing and threatening, warning that revenge for what was done to the deceased will come to each of them unless they honestly answer all questions put to them, which reveals that maybe they're not quite as guiltless of the girl's death that they maintained they were. It's a familiar story of the elimination of each of the group one by one (despatched by varied grisly means), a formula that has been the staple of horror films for generations but here put in a refreshingly up-to-date setting - though we all know that this won't be the last of them!

It's an unknown cast (at least to me), as is director, Levan Gabriadze, but they're all strong and believeable.
I wasn't at all bored even though we've all seen this formula used numerous times in the past. One is constantly guessing who is going to be next? - and will anyone survive?

I suppose my main criticism is that the shock moments too often fall back on the old threadbare cliche of having a loud thud or thump on the soundtrack to ensure that one jumps in ones seat. I think it's a weakness in that one shouldn't need any such 'assistance' to be shocked. If the happening itself is effectively and unexpectedly depicted that should be enough to give one a jolt - and in most of the shock events here this does have all that, so there was no need to fall back on what has become an overused, cheapish trick. It's a shame because it could have stood on its own two feet without having to go to such resorts. But that aside, it was a pleasant surprise of a film (if this sort of horror is to your taste, that is).........................6.5.