Film: 'A Royal Night Out' 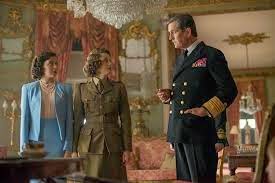 Preposterous story (one assumes, and for which this film might be forgiven) but unexpectedly ponderous too, with patchily few entertaining episodes.
It is documented that on the evening of 'Victory in Europe' Day, 1945, the Princesses Elizabeth and Margaret did indeed venture, chaperoned, out of Buckingham Palace (with friends) to join in the celebratory revelries with the 'common people' in the vicinity and beyond. That much is known. What then happened in the ensuing hours is not.
This story imagines what might have occurred that night, the two young ladies' only true night of 'freedom', and I have no complaint in the least about that, though the unlikeliness of events turning out as depicted here hovers over the action throughout.

The 19-year old Queen-to-be, Elizabeth, is played here by Sarah Gadon, definitely good in portraying a young woman, very conscious of her unique position, and attempting to maintain an air of decorum while everybody else is letting down their hair (and.....?) in various stages of inebriation. Bel Polay is Margaret, her sister's junior by five years, already showing her flighty, carefree side, that arising at this early stage of her life more from her adolescent years than her later developed love of the 'high life' with drinks ever on hand.
Rupert Everett, in his depiction of King George reminded me much more of Prince Philip. On the other hand, the undoubted star of the film is Emily Watson doing a superb version of the then Queen Elizabeth, easily making up for the film's deficiencies. She's quite uncannily accurate. I could have done with seeing much more of her.

Soon after the two young ladies embark on their night of adventure they lose/shake off their guards, get caught up in conga lines and are separated in the general free-for-all melee. Elizabeth, not knowing directions, accidentally gets drawn towards a young man who (would you credit it?) has precious little Royalist sympathies and who, with good reason, wishes to avoid military authorities which are in evidence everywhere. He is no more than mildly interested in her, preferring to get together with more 'available' females, while her only interest in doggedly clinging onto his company is as someone who can help her get around and look for her sister who, meanwhile, is visiting certain establishments where one would hardly expect someone of her position and stature to be seen. Needless to say, at no time are they recognised for the people they really are.
As the night goes on both Elizabeth and the young man develop a degree of mutual emotional attraction, approaching a soggy sentimentality at the end, though there is nothing that breaches the requisites of propriety. (They wouldn't have dared to suggest such!)

The direction of Julian Jarrold ('Becoming Jane', 'Kinky Boots', 'Brideshead Revisited') is fair enough, though I doubt if many or even any of the scenes will prevail in the memory very long.

This could have been more interesting, but I felt it over-protracted and coming dangerously close to giving me that feeling of ennui, despite it being only just over an hour and a half long. If you like Emily Watson as I do, go see - otherwise, well, only if the subject grabs you...................5.