I  want to use this opportunity to point out to my revered blog-followers that once again my computer is stuttering and spluttering to a halting destination, I fear, with frequent freezes and 'unresponsive message' alerts, taking me about six hours (or more) to achieve what ought to be managed in less than one. Commenting on some of your own blogs has become near-impossibly arduous. Even my e-mail account, where I can send missives without trouble, has got the inbox jammed up, taking a full week for me to see any individual message as they dribble through at the rate of about one per day. If I had the money I'd get the whole apparatus rectified without delay, or, far better, get a brand new up-to-date computer, but as I haven't I'll have to struggle along as best I can. So please bear with me if you've written something I would otherwise have liked to comment on and which you might have expected. Sometimes just getting your own blog on screen can freeze up the whole works for maybe an hour (It happens with some, but not for others.)  I'll continue trying to respond where I can, but if you don't hear from me for a while I will still be here, hoping for better times shortly. 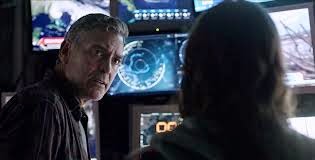 This bored me to distraction. I do believe that about two-thirds through I did actually momentarily nod off. Not even the on-screen ruckus of explosions, fights with lethal ray guns, humanoid robots, high-speed aerial vehicles - you know, all the usual stuff - could prevent my dozing.
It may actually be a good film for all I know, but I'm clearly as far removed from the audience this is aimed at as it's possible to be, and only went because there was a chance to see it for £3 (American about $4.60 ), it not being on my 'must see' list.

Where to start? I'll give it short shrift, but this idea of averting global catastrophe has become so banal now.  We've seen it done to death that it's become like 'crying wolf'. It just doesn't engage any more - at least not for this viewer.
George Clooney, looking far from comfortable in his role, is a life-long inventor since being a little boy and, playing around with glimpsing into the future, sees an apocalypse coming, and even has a countdown apparatus to zero hour. But his vision of total annihilation is questioned by a bright young girl who joins him (plus a human-replicant younger girl-robot), she having acquired a 'key' to actually travel to the future. However, she is also armed with that highly desirable quality, 'optimism', which he lacks. Also hopping between present day and future is shady character Hugh Laurie, looking almost as uncomfortable in the wrong part as Clooney. Fights develop involving gangs of human-like robots, but it all left me cold and wanting it to end (The film, not the world - though having said that......). Do Clooney and the girl save the entire planet from its likely dire fate? I was past caring, though I'm not going to 'spoil' it for you.