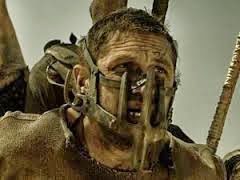 Being led to believe that this would be a virtually non-stop din plus a fair helping of spectacle and little else, I went along armed with cotton wool balls to plug my auricular orifices should it have been necessary. In the event I didn't use them. The film wasn't quite as totally vacuous as my expectation of it, though in terms of entertaining me it did leave much to be desired.

Tom Hardy is now in the role previously occupied by the career self-destroying Mel Gibson in the 1979 original version of this basic plot (such as there is) followed by its less satisfactory sequels. I like Hardy a lot but didn't find it so easy to accept him as the title character, a man with no compunction about killing left, right and centre. Admittedly. he was fleeing for his life from his foes, barbarian grotesques who'd themselves think nothing of wholesale slaughter to achieve their purpose. Yet under this tough-man exterior, evolved through a lifetime of being forced to survive by any means, Max can melt to reveal that he has a cream-puff interior. I suppose the unbelievablity of the character itself has more to do with it than the actor playing the part. I dare say that in the original (seen when it was first released and never again since) I must have felt the same way about the then unknown Gibson.
On the other hand we have Charlize Theron as the softly-spoken, one-handed Furiosa with whom Max hitches an escaping lift - but by golly, underneath she's as tough as old boots! She has in tow a bevy of (initially) five beauties, forced wives of the dastardly chief villain from whom they have been rescued. They are wearing little more than semi-diaphanous white shifts. But additional protection is unnecessary as their faces and exposed body parts manage to escape the slightest graze or mark despite a max-voltage chase through the wilds of the Australian deserts with bullets, shrapnel, missiles, fire and God-knows what else zinging past them by millimeters - though, it must be said that as a concession, some of their hairstyles do get rather mussed. (Must have been such a nuisance!)
The Furiosa character is very much one-dimensional - though there are hints that (surprise, surprise!) she too has a heart of gold. If it wasn't for the frequent cacophonous noise level around her voice might have the property of sending one into slumber.
Apart for the two main characters the film is peopled with deformed and/or painted minor characters, some hideously so, their bodies either deliberately shaped or adorned with ornamental metals, tattoos, survival paraphernalia and this and that, all calculated to heighten ones feeling of revulsion.

One accepts, these days, that much of the long-shot fight scenes and views of crowds is achieved by CGI, a technique which, if it impresses at all, still manages to detract from taking ones breath away. I understand that Hardy did all his stunts himself and there's certainly no shortage of on-screen acrobatics and contortions here, yet hardly anything that we haven't seen before even though it is sustained for unusually long sequences in this film.
I also hear that it was shot in 2D and only later 'enhanced' in the workshops for 3D 'depth'. I doubt if the extra dimension was more than an improvement than a distraction.

Director George Miller manages to keep the action sections moving along at a cracking pace, with exceptionally fine editing. There were hardly any times I noticed where the 'joins' showed.

However, I must own that the whole enterprise soon began trying my patience. The first time I looked at my watch it was just twenty minutes in, and it's a two-hour film. I did think that I might well leave before the finish though I managed to stay the course, largely due by my getting more drawn in by the second half than I'd been feeling in the first hour.

Overall, I found it an 'okay' sort of film. It did what it was required to do, and that rather well, it must be said. But it was all very superficial - delivering thrills galore if that's what you're after though with nothing underneath. However, it's not exactly the kind of film where one would search for profundities, and nor does it purport to be.
Anyway, after due consideration I'll opt for giving it a rating of....................5.5