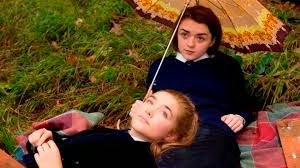 Quite an oddity, this one. It ought to have been more satisfactory than it was.
Set in an English all-girl school at the end of the 1960s, it concerns a contagion of fainting among the mid-teen pupils (plus one of the teachers) after a girl dies, with the friend who seemed to have a bit of a schoolgirl crush on her, seemingly being the centre of this rash of spontaneous passing out - some lying still, some with twitchy fits.

Like 'Madding Crowd', which I wrote about yesterday, this film too has an illustrious predecessor, at least as regards to both being in the general same milieu of a girls school where the pupils are the passive victims of some unexplained goings-on - though 'Picnic at Hanging Rock' was, of course, an Australian film and set several decades earlier. Comparisons quickly run out as the earlier film, now exactly 40 years old and directed by the young Peter Weir, has haunted me ever since the first time I saw it back in 1975, and since then has remained in my list of all-time favourite films. 'The Falling' is not in that class by a long chalk.

One assumes that here, the mysterious 'force'; that is causing the fainting is connected to the girls' burgeoning physical maturity, though that is what one can only assume. There are no clues as to what's at the bottom of it.
The biggest name in the cast, Greta Scacchi, is almost unrecognisable as the chain-smoking headmistress who doesn't let the presence of pupils deter her from lighting up. The only other name I knew was Maxine Peake, likewise a chain-smoker in this, as the withdrawn mother of the girl, Lydia (Maisie Williams), who's believed to be the cause of the commotion. The only other significant male in the cast is Joe Cole as Lydia's brother.

One of the things that marred the film for me was (yet again), over-insistent and loud music in the form of pop-folkish songs on the soundtrack, some being Dylan-esque in a nondescript kind of way. There were far too many of them and in no way did they enhance the mood but, rather, took it down.

I think I know what writer-director Carol Morley was aiming at with this feature, but if I'm right then she didn't achieve it.

I get the sense that there was a better film under the surface but there were too many disparate and distracting layers for it to come across as a memorable item. I'll grudgingly concede that they could have been onto something worthwhile  in my rating of...............5/10.
Posted by Raybeard at 08:19