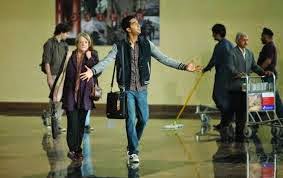 So, cinema-visiting now resumed, in this year which has got off to a disappointing start in that, through circumstances, I've already had to miss a number of notable films. (Much appreciation again to those who left good wishes on my previous post).

I had no enthusiasm at all to see this sequel to a film which, to my amazement, was seen as long ago as four years. I could have sworn it was only as recent as 2013, maybe even just last year. Also surprising to see that I gave this original a rating of 6, when my memory of it is having enjoyed it markedly less than that.
This latest film seems to have been pushed through as an afterthought on the back of the first having unexpectedly done as well as it did - so let's have another shot at it and make even more money.

Most of the original cast are here reprising their former roles - Maggie Smith, Judi Dench, Bill Nighy, Celia Imrie, Penelope Wilton, Ronald Pickup - and again with the chirpily watchable Dev Patel, here trying to keep his self-willed mum in check -  plus, this time, the seemingly incongruous figure of Richard Gere as an unexpected hotel guest of whose true identity Dev Patel has suspicions.
There's none of the cast whom I dislike and they are all given a reasonable share to do, though nothing that carries great weight. Being a collection of disparities, there is a far weaker dramatic thrust than in the earlier film, the principal focus this time being on Patel's upcoming wedding as well as his proprietorship of the hotel that was the central feature of the original film, now with the addition of an adjacent dilapidated hotel being renovated. There's much romantic twisting and turning too among the older members of the cast, Gere included, leading to employment of excessive sentiment which I found embarrassing, as well as being unlikely.
The script is up to the mark most of the time, Patel's stilted and entertaining use of English being one of the joys. Scenes of Indian city life as well as some panoramic views from the train are very impressive.

John Madden ('Shakespeare in Love', 'Mrs Brown', 'Captain Corelli's Mandolin') gets through it all with the efficiency one would expect.

An okay film (just), made on the flimsiest of pretexts. The cast obviously enjoyed themselves making it, which can be a fatal flaw, though here it squeezingly passes muster. Only please, let's now call it a day and don't go and make yet another one..................4.5/10.
Posted by Raybeard at 00:42