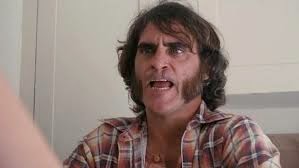 This is weird, though not in the quirky, positive way that I found his, Thomas Paul Anderson's, 'Magnolia' of 1999.

Director Anderson has an impressive record of having made some pleasingly off-beat films in recent years, among which I'd cite 'The Master' and 'There Will be Blood' as being particularly fine. (There was also his 'Boogie Nights' which others have liked more than I did). And now comes 'Inherent Vice', certainly odd, though in a far less satisfying way than some of his others.

I assume that this film, with all its dope-smoking, is meant to reflect the unreal, semi-dream quality of Thomas Pynchon's novel (unread by me). I was quickly lost in its incoherence - the essential story being of Wolverine-sideburned, sprawling-haired Joaquin Phoenix, playing an LA private detective in the 70s, trying to find out what happened to a missing former girlfriend, and meeting all sorts of strange characters on the way, including a coterie of leathered-biker Nazis (or so it's assumed).
To maintain interest in a close on two-and-a-half hour film is a tall order and requires a firmer anchor than is provided here. Not that there aren't the occasional moments of amusement, though hardly sufficient to make the whole a watchable event.

Phoenix is good, as he generally is, as is also Josh Brolin, playing a humourless, abrasive, anti-hippie officer of LAPD, creating sparks whenever he and Phoenix encounter each other. There's a bit of violence here and there but nowhere near as much as one might expect. We also see, in a minor role, Reese ("Do you know who I AM?")  Witherspoon - whom we saw together with J.P. recently in the Johnny Cash film "Walk the Line" - as well as Owen Wilson and an oleaginous Benicio Del Toro. But the film belongs to Joaquin Phoenix who plays spaced-out perplexity quite convincingly.

I saw the film 24 hours ago but it's already fading in my memory, which is curious in that its oddity might have been expected to be longer-lasting mentally, but its confusion does it no favours. It's a long haul. Maybe it might have been improved by doing what so many of the characters do, watching it while drawing on a spliff....................5/10.