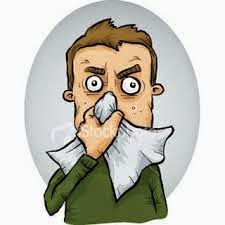 Lest my silence for some time has been wondered at, let it be known that I'm here, albeit suffering with particularly nasty, heavy cold. Happens once every few years, though this one has debilitated me to the extent that I'm retiring to bed half a dozen times a day or more, trying to sleep it off, without success.
Colds are much less frequent for me than with many. Doctor says it's because, living such an isolated life, I don't give the bugs a chance to take hold - except for rare times like this. Anyway, I keep feeling that it's improving then ten minutes later feel I've hit rock bottom again. No stamina, no concentration....you know the feeling. (Ah -choo!)

Only film I've missed so far that I'd planned on seeing was the Jennifer Aniston 'Cake', but of which reviews have not been particularly enthusiastic.

My only observations on the Oscars were  - (i) How did 'Boyhood' manage to lose out as Best Pictire to 'Birdman', of all films? and (ii) Pity again that Steve Carrell wasn't recognised for his role in 'Foxhunter', though being nominated as 'Best Actor' it would, of course, have pushed aside our very deserving Eddie.