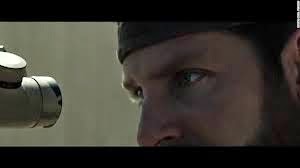 Impressive, viscerally powerful, Clint Eastwood-directed feature, with many tense moments and situations, several of them distressing. Not a film to be 'enjoyed' in the usual sense of the word, but absolutely not one to be ignored either.

With only five weeks of this year having lapsed I was already getting alarmed at the number of films which I badly wanted to see passing me by in having awkward or impossible screening times. I thought this one was going to be another which would extend the list. Then, as if by special request, and on the very last day of its three-week run, a cinema puts on a single morning matinee screening. Naturally I couldn't miss out on the chance.

Bradley Cooper (beefed up for the major part of the film) plays the titular Chris Kyle, a Navy Seal on a succession of tours of duty in Iraq, taking periodic leaves of absence over a few years, to return home to Texas to his wife (Sienna Miller) and their growing family. If I'd been paying more attention to the reviews I should have realised that this was based on a true story. As it was, it hit me like a punch in the gut in the closing credits.
The action scenes on duty are believably tension-ridden. When trying to root out the enemy and their hideaways, which native Iraqis can be trusted? Any of them, children included? Sniping is a feature of both sides of the conflict. Kyle's expertise and successes gives him a commendable reputation among the troops as he witnesses a number of his comrades-in-arms being shot down, some killed outright - and he is steadfast in trying to mete out the same to the enemy.
He makes periodic phone calls to his wife back home, sometimes while on intense duty (slightly strange that it seemed to be vaguely the same time of day in both locations), assuring her of his next visit. I also found the relative scarcity of non-white faces a bit odd, but what do I know?
On his home visits his wife senses a growing alienation in Kyle which, during his final home visit, gets to be a bit scary. One wonders how the horror of what he's seen on duty has affected him, and if it's going to be carried over into his personal life.

There's been talk and criticism about the film 'waving the flag' too much. I can just about see why but I'm not sure that it's fair. There's no large-scale triumphalism at all. The political issues are left unaddressed, but surely just about everybody knows what's going on. (We see TV footage of 9/11 early in the film). Of course there's the ongoing question as to whether the invasion of Iraq was legal at all, which I think may well colour many people's opinion of the film. It's a position I tend to lean towards but, being no expert in international law and the U.N., I leave it for others to argue. If one is adamant that it was indeed illegal, I suppose any film that doesn't present that point of view or imply it will be considered unsatisfactory. (The first review I saw on IMDb called it 'tripe' and rated it 1/10!)  But the film is not about the wider picture. It's simply a personal story of one man on active service.

Acting and direction is of a high standard in all aspects. As usual, Eastwood has his finger on the pulse of what works, and this is a good example of his capabilities.
It's not a film I'd care to see again, only because of the raw emotions involved. I'm tempted to score it with an '8' but, in the final analysis, because of my frequent discomfort while watching, I'll have to mark it down a tad, though that's not a fault of this film intrinsically..........................7.5.


Btw: I  see that Bradley Cooper is coming to London with the full Broadway production of 'The Elephant Man', for just 12 weeks starting in May. I'd give so much to be able to see it, but its location as well as price, put it, for all practical purposes, beyond my reach. If it's not already booked out for its run it very soon will be. It's playing at London's prestige (and hence most expensive) theatre for 'straight plays', the Theatre Royal, Haymarket.
When I had lavish resources at my disposal I attended there a few times seeing, among others, Jack Lemmon, with Michael Gambon, in (the unfortunately inferior), 'Veteran's Day'; Liv Ullman in Harold Pinter's 'Old Times' - and one-time hottie, Jean-Marc Barr, with Redgrave (V) in Tennessee Williams' 'Orpheus Descending'. Those were the days! Would that they could re-commence with Mr Cooper in this play!