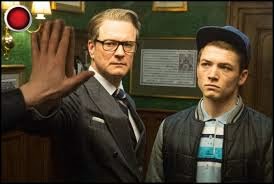 Well, stab me vitals! Could that be the ever present Mr Firth yet again? Yes, indeed it is. Why, it must be all of a fortnight since we last saw him on the big screen. Welcome back, Sir! It's been such a long time - not!
I shouldn't be at all surprised if I were to be told that he's appeared in more films than I've had nocturnal emissions - the releases always coming with a big splash, lacking only a fanfare of silver trumpets. (His films, I mean!).

Truth to tell, I quite enjoyed this. Took me quite a while to tune in to the necessary wavelength, but once I'd homed in it carried me along rather nicely.

Based on a comic book of the same title (unknown to me) it concerns Firth as a British secret agent, all of whom are known as 'Kingsmen', recruiting an unlikely, anonymous, young protege to train as and replace an agent who's recently met his end. The secret agents' look and manner is a dapper one - superficially a gentlemen in etiquette and dress, but covering a lethal underside when provoked or on a mission.  It reminded me a lot of the John Steed character in the 1960s TV series, 'The Avengers'; debonair, bowler-hatted, brolly-carrying.
There is a dastardly, maniacal villain played by Samuel L. Jackson, bent on 007 nemesis-style world domination (through widespread implants in the head to control behaviour), while Firth's boss at the head of the Secret Service is Michael Caine. Most of the screen time focuses on the young pupil, acted by one Taron Egerton  (no significant feature film on his C.V. until this production) - as well as on Mark Strong, on the side of the 'goodies'. Two young females also feature, both unknown names to me - one, another young trainee alongside Egerton, aspiring to replace the lost agent - and the other, a blade-walking sidekick to Jackson's 'Dr Evil', whose blades are rather more versatile than for merely walking on.

There's loads of comic-style violence, very vicious (nothing unduly dwelt on), very stylised and utterly impossible - often with a single character against an entire group rather than one-to-one combat, sometimes on a spectacular scale. It's all delivered with a significant measure of boys-own-comic-book humour, quite effective for the most part. No shock to learn that director Matthew Vaughn has directed a number of films in this genre, some of which contain extreme violence. ('Lock Stock....','Snatch', 'Layer Cake', 'Kick-Ass', 'X-men: First Class' plus 'Stardust'. Quite a list!)

The fantastic story wrong-footed me a few times, though at the start I wasn't at all sure how one was supposed to take the turns in plot. It's really another of those films where it's best not to ask too many questions, but just to allow it to get on.