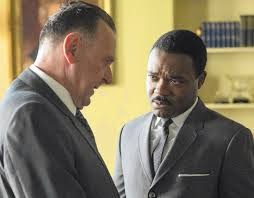 Powerful film depicting a few months in 1965 in the struggle enacted in American South, led by Martin Luther King, to secure parity of enfranchisement of negroes with whites.
Unremittingly serious, often bleak, sometimes anger-provoking and tear-producing (apart from final jubilatory moments of the campaign's vindication) the film follows the historical tussle between a beleaguered President Johnson, a resolute King who would not water down his demands, and with Governor Wallace of Alabama, stubbornly refusing to accept defeat.

I strongly recall these three characters who regularly appeared on our news bulletins of the time - perhaps not so frequently with the last of these, though we did still hear quite a lot from him. But therein lies some of the film's weakness for me in that I found the patent lack of facial resemblance of Tom Wilkinson and Tim Roth to the actual Lyndon Johnson and George Wallace respectively, an almost non-stop distraction. Even the formidable David Oyelowo as King only bears a passing resemblance to whom he was playing. (In one brief scene we also see a J.Edgar Hoover who similarly looked utterly unlike the person I remember, as is plain from photos and film footage of the time.) I'm sure that younger members of the audience, not around or aware of the politics of the time, would not be nearly as troubled on this point as I was.

However, that aside, King's speeches were certainly stirring and powerfully delivered by Oyelowo, despite King's original words having to be paraphrased because it wasn't possible to obtain permission to use them , they having been legally allowed to be used only by Steven Spielberg's company in a film of the subject which never materialised. But it didn't really matter a great deal as the essence was the same and they were profoundly effective.

The savagery with which demonstrations are put down and the brutality of the confrontation by state troopers of the 50-mile march from Selma to Montgomery are believably and horrifically re-enacted. It would take someone of inhuman emotional detachment not to be profoundly moved by the events. (I actually found myself shaking at one point).

We see Oprah Winfrey (she also being one of the film's producers), several times as Annie Lee Cooper, one of the film's key female demonstrators, though she doesn't have that much to do apart from appearing now and again. The acts of the campaign are virtually entirely male-decided. There's also Cuba Gooding Jnr in two shortish scenes, as well as the increasingly seen Alessandro Nivola, here in a role of still less screen time.

The director is one Ava DuVernay whose first cinema feature this appears to be. She ought to be satisfied with the final product as it achieves what it set out to do.
However, it being such a sombre subject, there was little sense of any light and shade which, admittedly, might not have been appropriate. The film was useful for me in that it 'joined the dots' of events with which I was only sketchily familiar because of the passage of time, though I do remember well the main protagonists of the drama.

It's an accomplished film but I did find it slightly over-bearing in its earnestness. I think those who are ignorant of the events and are prepared to learn some recent history will take away from it rather more than I was able......................6.5.