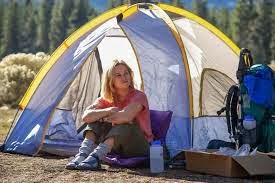 Unexceptional film of true story depicting the 1,100 mile solo hike of Cheryl Strayed along the Pacific Crest Trail - roughly Mexican to Canadian borders, the subject being played by Reese Witherspoon. (In 2013, in inebriated condition to State trooper - "Do you know my name? You're about to find out who I am!") She's been nominated for an Oscar for this part but I didn't think it was that special enough to have been singled out for praise. I can see at least two or three worthier nominees in the list.

A lot of this film consists of numerous flashbacks during her journey - to her childhood with her brother and late, doting mother (Laura Dern); her infrequently seen, violent father; her earlier teenage and adult life. These are all presented with many jump-cuts which I found difficult in that just when I thought I was getting a handle on the situation it would return to her reminiscing in her tent or wherever. (Incidentally, towards the end I had to look away from the screen at the [edited] shooting of a horse).
She meets an assortment of characters on her way, mainly men, sometimes singly, other times not, getting one to invariably wonder whether they can be trusted. (Well, yes and no). Then there's unsurprising difficulties with the provisions and camping equipment she's brought with her (adequate? right sort?), plus a couple of brushes with creatures encountered.
I found it all somewhat run-of-the-mill, which is surprising in that the screenplay is by none other than Nick Hornby. But if the raw material, Strayed's own memoir, was fairly standard stuff then what else could be done with it? Inventing incidents that didn't happen wouldn't be fair.
The scenery is sometimes as spectacular as one might expect though there are fewer grand vistas than I might have thought, a fair amount of the film taking place in various tree-surrounded  locations, which could just as well have been anywhere else.
Director is Jean-Marc Vallee, he who directed the far superior 'Dallas Buyers Club' of 2013.