Film: 'The Theory of Everything'. 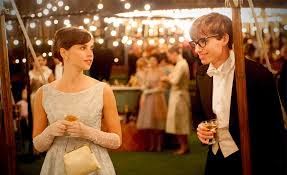 So, after a hiatus of over three weeks, back to the old routine, whilst noting films that I'd wanted to see but didn't (owing to unpropitious circumstances) disappear over the horizon, very likely to end up on my sad 'Never Seen' list.

This particular feature follows the widely-known true story of Stephen Hawking, from nerdy, rather arrogant and annoying student at Cambridge Uni, surviving through the onset of muscular dystrophy and its expected short life-survival, to world recognition in his quadriplegic and electronic-voiced  state, as one of the most prominent astro-physicists, certainly the most famous, in the world today - or, possibly any age, maybe on a par with Einstein himself.

I have absolutely no quibble with the portrayal of the two central characters, played by Eddie Redmayne as astonishingly believable as one can wish, and Felicity Jones as his (first) wife, Jane, giving him selfless support throughout his alarmingly rapid physical deterioration. The couple are at the centre of screen attention for the whole two hours.
It's not the film's fault that Hawking's story is so celebrated that it would have been distracting and troubling to have deviated from it. I have little doubt that it is as faithful a representation as we are ever going to see. But fore-knowledge also confines it. Of course there were details of certain events in his life which I hadn't appreciated, but none of them were so big as to surprise one. A lot of people, me included, knew that his first marriage hadn't lasted and that he married his nurse. So the story really had nowhere else to go.

Director James Marsh gets the very best out of all his cast, minor characters too. As we approach the time of the Oscar short-list announcements it would be a gigantic error not to include Redmayne, and if he were to actually receive the award I shan't be complaining. In the BAFTA awards, which precedes the Oscars by a few days, it looks as though 'Best Actor' is going to be a two-horse race between Redmayne and that Cumberbatch chappie (for 'The Imitation Game'). Between the two I'd have to give it to Eddie R. for this, surely one of the most jaw-dropping and believable performances put on screen  - ever!
I was also particularly struck by how different Felicity Jones looked near the film's start, all youthful and fresh-faced - but by the end her features were so careworn, the understandable result of years of uncomplaining ministrations to her husband. Remarkable.

It's a fine, fact-like (presumably) representation of a significant chunk in the life of an extraordinary man. I believe the film has had the thumbs-up from both Hawking himself and Jane (this film is actually based on her book of her years with Hawking). It would have been deeply disappointing if it hadn't. But by attempting to be so faithful to the facts the film came out to me as being a bit lacking in 'edge' - maybe even a trifle sterile? Still a recommendation, though........................6.5.
Posted by Raybeard at 08:08