Before writing about this film I might point out that yesterday, on the way to the cinema, I suffered yet another physical mishap. Preparing to alight from the moving bus, making my way downstairs I missed my footing and twist-wrenched my knee. Painful it was too, and is still so after one night. I'd already been limping because of a callous on my right sole, which was supposed to have been removed at the local podiatry clinic a couple of weeks ago (free under our Socialist-inspired National Health Service!), but it's still there and causing pain. Now I'm hobbling about with incapacities in both legs and can only take flights of stairs one step at a time. I mention this because once again it's going to mean missing films which I'd intended to see. Looks like the first casualty will be day after tomorrow's 'The Homesman' (Tommy Lee Jones) - and that may well not be the last. Will try an ice compress shortly but as at now things don't exactly look rosy. 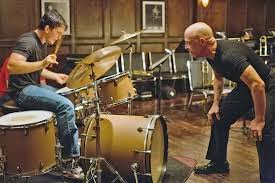 Watching this in considerable discomfort could not detract from my recognition that this film has real clout. It's an unusual scenario in that I don't recall any other fictional film where the focus is on a drummer - with a tutor from the depths of hell itself. It's also remarkable for its utterly blistering two central performances.
The plain-faced Miles Teller plays a first year student jazz drummer at a music conservatory where J.K.Simmons ('Spiderman', 'Juno') is already scaring the bejeesus out of his class, he being an horrific martinet of a professor whose mood can turn on a sixpence from all sweetness and light to yelling and barking his head off, sometimes with snarls and put-downs, as well as flinging conveniently-snatched missiles at members of class who displease him, cowing them into submission. Talk about 'blood, sweat and tears' - it's precisely all three of those things!

I'd call the music 'Big Band' - here with a group of a dozen wind players plus piano, guitar, bass and drums - though I'm happy to be corrected as to the category into which it falls. It worked for me even though this kind of music fails to achieve any 'inner response in my soul' - unlike classical, popular, musicals, as well as folk and even some pop. I've never really 'got' jazz, despite lifelong efforts to remedy that and discover why so many are emotionally moved by it, wanting to share the experience. There's seems to be something of a mental block there for me. Anyway, that being the case, it was even more astonishing that this film managed to hold my attention with ease.

The conservatory class is up for a competition (who would have thought it!) and no one,  but no one,  is going to get in the way of the tutor getting his class to win. His regular tirades are littered with profanities - all the expected ones, of course - although quite a number of them do also have a measure of wit attached. He does make a brief, sexist put-down to the only female member of the group, who is only rarely in shot. But afterwards I was wondering why, out of all the ones he selected for his ritual humiliation, he didn't once choose to abuse any of the several African-Americans there.
Of course it wouldn't have been the film it was if the story hadn't focussed on the relationship between tutor and the new drummer member - and from the very off it's no-holds-barred. The mild-mannered Teller's feeble attempts to stand up for himself very quickly fizzle out into accepting his degradation.
It won't be any surprise to learn that among the insults used against him is homophobic language ('faggot' and 'cocksucker', of course), those expressions being, predictably and regrettably, of first resort to anyone wishing to humiliate. (There's no suggestion at all that the Teller character might be gay. Anyway, he's got a girlfriend for at least part of the story, so there!.) However it's a measure of the writer's restraint (Damian Chazelle, also the film's Director) that these particular words are used so sparingly among all the other invectives. I counted only three instances. But that got me also wondering whether, if he had chosen to rail against one of the African-Americans, would his language also have been in-your-face, thick with racist epithets? Or would that be beyond-the-pale unacceptable - both to the character's position as being on the conservatory staff, as well as to the film-makers in selling their product? Food for thought.

Just when we thought the film was starting to glide to its conclusion with a level of smoothness having been attained between the two main characters, who seemed to have come to some mutual understanding, something nasty occurs between them. The film ends with the expected virtuoso display - a performance which succeeded in taking my breath away, despite my not appreciating to the fullest that genre of music.
(The title of 'Whiplash', by the way, is the name of one of the pieces the band is rehearsing).

A highly recommended film. Although the general line of the story might be familiar, the means it employs, a young drummer, is certainly unusual - and the two lead actors carry it off forcefully,  penetratingly and convincingly.....................7.5