Film: 'Into the Woods' 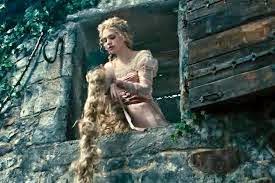 I approached seeing this with huge trepidation, mainly because I know the stage piece so well and like it a lot - but also my not being a big fan of filmed theatre musicals generally (though there has been a modest number attaining my approval). This is one which I found very agreeable on the whole.
I'd been additionally put on guard by reading only yesterday a distinctly unenthusiastic review, as well as a present IMDb average rating of a lukewarm 6.5.

Drawing together the four disparate well-known fairy tales of Little Red Riding Hood, Jack and the Beanstalk, Rapunzel and Cinderella it adds another story, one of a baker (James Corden, 'surprisingly' good) and his wife (Emily Blunt) condemned to be childless by the wicked witch next door (Meryl Streep) who will only lift her curse if they obtain for her four key articles, one from each of the other tales.
There's also Johnny Depp playing the Big Bad Wolf in what is little more than a cameo.

The first part of the film goes swimmingly and I have no major complaints at all. It's good to be able to hear all the words of Sondheim at his acerbically finest and cleverest. But, as in the original stage version, there is a violent switch of mood about two-thirds through when it takes the tales beyond their 'happy-ever-after' conclusions and gets the characters darkly moralising on the consequences of getting ones wish. I wasn't sure if such a wide contrast between the frequent comic moments in the first part and the subsequent serious reflections worked successfully in the theatre and, to my mind, it works even less so in this film, the latter providing an over-extended longueur which was starting to try my patience even though I knew how and when it would end.

Rob Marshall's direction was pretty faultless and quite imaginative - and he used cinematic effects to the maximum which, of course, enabled it to be more literal than a stage production could ever be.
As to the cast, although Streep was as good as one comes to expect, I personally preferred Julia McKenzie in the part where she hammed it up gloriously with pantomime-like relish perfectly in tune with the part, and evincing hisses from the live theatre audience. I wasn't even slightly tempted to hiss Streep.
In the West End production I saw, the wolf was played by an actor wearing the full head of that animal rather than the minimally suggested one of Depp. I would have preferred it to have been so in the film too, and I think it would have made it more interesting than seeing Depp's familiar, hardly made-up, face yet again. But he plays the small part quite well - better than, I think, he did for 'Sweeney Todd' where he didn't look visually right for me.
Others in the cast include Tracey Ullman, Christine Baranski and.........Chris Pine.

I think most cinema audiences won't know the stage musical - or even that this is a musical at all. If they don't know it I'd be surprised if they don't like the first main section, but may well come to be perplexed when the big switch happens, as I was the first time I saw it on stage.  But this is a faithful rendition of the original and I can't really suggest a major way in which it could have been improved.
Btw: Sitting a few rows behind me was a group of four 'mature' adults. One of the men had one of those infectious laughs, the kind that makes one laugh all the more - and, very importantly, he was laughing in all the right places. His welcome presence enhanced my experience.