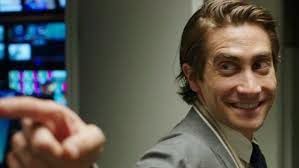 Chillingly credible story of a ruthless freelance newsreel photographer in LA who'd do anything, with no scruples at all, in order to film a scoop of a gory news story, which he can then flog to a TV company at his demanded price. Think of the news-pack in Paris descending on the wreck of the Princess Di car crash while she was yet alive and you'll get the picture.

I wasn't sure if Jake Gyllenhall could carry off playing such an odious character as up to now he's been almost typecast in playing roles with which one can sympathise. But he pulls it off with aplomb - creepy, glib liar, entirely self-centered, all with an impenetrable veneer of utter self-confidence in his own ability, only cracking once in the privacy of his own home.
He targets a news company managed by Rene Russo (excellent - where's she been all these years?) whose TV ratings are in the doldrums so badly needs a boost. She doesn't take long to see that Gyllenhall can produce something really special and regularly. There's a telling scene in a Mexican restaurant when the two of them are dining (at his cheeky invitation) where, despite their age difference and relative statuses it becomes clear as to which of them is calling the shots - and it's not her, reluctant to let such an able provider of compelling footage go to another company.
He employs (thanks to some imaginative untruths) as a sidekick, British actor Riz Ahmen (also very good), who captures the quandary he's in in needing the pittance of payment he's offered, being otherwise unemployed, yet having grave doubts about the nature of work he's in and having to put up with Gyllenhall's bullying and bluster.
Bill Paxton also appears as a more experienced, rival freelancer in the same business, the two of them bumping into each other covering the same news events.
Throughout the film I was waiting for the Gyllenhall character to come a cropper and get his just deserts.
The film ends with a tense, expertly built-up climax, partly deviously-engineered to make it more 'newsworthy', which itself is crowned by a most appalling act.

My only slight quibble with the film was how did Gyllenhall manage to become such a hot and expert film-shooter just about immediately? At the film's start he didn't even own a camera!

Director Dan Gilroy (this his first as director) does a flawless job. No reservations here at all.
Was there any background music? If there was I didn't notice, which is a big plus.