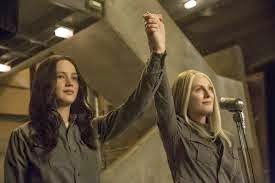 It really needs an aficianado of the Suzanne Collins books and/or the previous films of the series to give this a fair review. I've not read the novels but I have seen the lead-up films which, for me, were just okay. Such had been my (lack of) interest on where the last instalment ended that throughout this film I had hardly more than the foggiest notion what was going on here. If I do go to the forthcoming concluding part it'll only be in order to have seen them all, rather than demonstrating any enthusiasm. I dare say that when I see it what happened at the end of this one will already have faded from memory.

I shan't summarise the plot as I'm bound to get something wrong and I can't be bothered to research it.  Please look elsewhere.

With a cast led again by Jennifer Lawrence it also includes previous regulars Donald Sutherland, Woody Harrelson and Stanley Tucci, as well as Julianne Moore and, in definitively his final film (though also due to appear in Part 2), Philip Seymour Hoffman in subdued, low profile mode. This film is dedicated to his memory. Pity that it's a relatively thankless part, which in no way stretches him, when he's made so many astonishing screen appearances in his career. But that's the way it goes.

Director Francis Lawrence (who also made 'Catching Fire') does alright with the material. Some of the CGI-created scenes are quite impressive, but it's what one comes to expect these days.

Whereas the previous film concentrated more on person-to-person combat this one deals with big forces and armies - therefore more explosions and gunfire rather than physical conflict.

I'm going to make one of my regular moans now. Virtually throughout the entire film there's music on the soundtrack - dramatic, menacing or tender, contemplative. Hell, why can't they just STFU!!! We don't need it!

To add to any irritations at the screening I attended, just four seats away from me was a lone woman who, for all the two hours, munched through sweets, with rustling of papers, and opening drinks cans. I was willing someone else (being the coward that I am)  to tell her to, for goodness' sake, just sit still and be quiet, but no one did - or dared (Wimps!)
When the lights went up at the end I was a bit surprised to see that she was quite mature, maybe 40 - but not too surprised to determine that she was, well, rather 'large'. I had to breathe in and squeeze my way past her as getting up for me was obviously too energy-expending.

I doubt if fans of this series will be disappointed. The series failed to carry me along from the very first film. But having said that, I'd rather see this than any of the 'Star Wars' films, for instance.