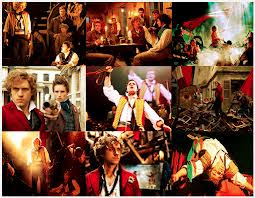 For the fifth occasion in the last ten years I've now paid to see a film in the cinema for a second time. (Others were - 'Hugo', 'Inception', 'Mamma Mia!' and 'Chicago')
In my posting of three weeks ago, although I said that I'd quite liked the film I was markedly less enthusiastic about it than just about all the other reviews I've read and blogs seen since, as well being cooler than the opinions of my sister and her hubby who both, on their annual visit to a cinema, were completely bowled over by it.
So I felt it my 'duty' to give it another go while it was still showing in the medium for which it was intended.

This time there was the advantage of seeing it not just in another cinema which, though much smaller, was recently constructed (with superior sound) and with a screen/auditorium-size ratio much larger than my first viewing. There was, consequently, more opportunity for it to overwhelm me. It also helped in watching it in warmth whereas in my first visit during snowy weather the heating had been under-effective making me aware of my freezing feet the entire time.
So, with the latter distraction out of the way I went, fearing that I might be the sole member of the audience there as it's now coming to the end of its cinema run. But the 90-seater was a quarter full for this 10.30 a.m. showing, which itself was reassuring. (Were some of them also seeing it a second time, I wondered.)

Of course re-seeing a film with which one is already familiar alters one's perceptions. There is none of the prior expectation or possibility of disappointment. One hopes that things are observed which one hadn't noticed before - and that did happen, principally in the film's direction. I hadn't realised what a fine job Tom Hopper had done as director. Subtle reactions of the actors' developing situations (including those in the minor roles) are extremely well observed and caught on camera in close-up - all of which cannot, of course, take place in a live theatre where the audience is several or even many yards distant from the stage, requiring those players to be unrealistically demonstrative in their actions and gestures. Hooper transfers it very well to make the most of the different, more intimate potential of the cinema screen. I was very impressed.
Having now examined and played my recordings I see that the excisions from the film are not as extensive as I thought they'd been. (2 hrs 38 mins for the film as against 2.48 on CD, though the former does have an additional short song.)

I've not changed my opinion re the cast, all of whom are good or very good - apart from the two Thenardiers who, I still think, are badly miscast, though it hardly seems fair to complain too much about lack of realism, in a musical of all things!


I'm being willingly drowned in 'Les Mis' at the moment. Not only am I following a radio dramatisation of the Victor Hugo 1,000-pager on the BBC in 25 X 15 min episodes, I'm also re-reading that mighty tome for the second time - as at now, one third through. Hadn't realised before how similar in form it is to 'War and Peace', actually pre-dating it by some 7 years. Like Tolstoy, Hugo muses for pages on end on military campaigns and strategy, both books involving the same man, Napoleon - though whereas in W & P it's mainly about the Emperor's Russian campaign and his disastrous retreat from Moscow, in the Hugo it's Waterloo and its aftermath, the political consequences of the treaty of Vienna and ensuing student unrests. All fascinating stuff.

Anyway, back to the film. In summary I confess that my opinion has now changed. I am now a fair bit more enthusiastic, and would therefore like to award it a promotion by one entire point on what I scored it previously. It now gets a ...........7.5/10!