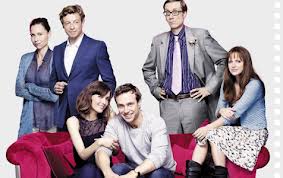 I went to this fearing that it might be a waste of time. But it's actually not at all bad.
Nineteen years after the release of 'Four Weddings', that film still casts a long shadow, and comparisons are inevitable.
When this new British comedy starts with a wedding ceremony with an officiating priest being the cause of a single over-extended joke, followed by a deliberately cringe-worthy best man's speech (albeit a funny one), well my resistance was already solidifying. But, must admit, that as the film progressed I did find myself warming to the characters - and there are certainly quite a few funny moments, several of them LOL ones.

Rose Byrne and Rafe Spall (centre, above) play newly-weds seeking counselling help for a marriage which has very quickly foundered. (Spall is the real life son of the now-veteran actor, Timothy Spall. Spall Snr tended to make his name playing bulbous-bodied grotesques and even now he retains his portly figure - so it's a bit surprising that I'm starting to find this sprog of his rather hot.) His character provides behaviour which his 'wife' deems tiresome or obnoxious but which we, seeing it from a distance, is quite amusing.
Among the cast is also the welcome presence of Minnie Driver, whom I don't think I've seen since the film of 'Phantom' nine years ago.
There's also Stephen Merchant (Ricky Gervais' ineffectual, lanky agent in the excellent 'Extras' TV series) whose one-note contribution to this film's humour is to come out with outrageously 'rude' remarks without realising how 'offensive' they are to others present - rather in the manner of Steve Coogan's 'Alan Partridge' character (of which I was a huge fan), though now all with a full-on sexual element. But he delivers his lines well and, I have to say, many of them are very funny.

The film does dip into sentiment towards the end in order to wrap things up neatly, but by then I was interested enough to know how it would turn out.
Still not a patch on 'Four Wedding' though, which was always going to be a tough act to follow, it's not as cohesive as that film was, and there isn't the range of characters here. Nevertheless, I had a pleasant afternoon - and I think when it comes on the telly and I sit down to watch it again, I'll possibly laugh even more....................................6.5/10


(Post-script added following day)
I went to this film yesterday having been aware of Mark Kermode's very thumbs-down review in which he said that he couldn't engage with the characters and hence didn't care what happened to them. As you can see from above, I didn't agree. Now this morning I read Philip French's review in the 'Observer' in which he blows an even bigger raspberry at the whole enterprise. (I wouldn't be surprised to read that he'd been humming the 'Dies Irae' at the time of writing!) So what am I supposed to do? Apologise for having laughed?
Posted by Raybeard at 08:52