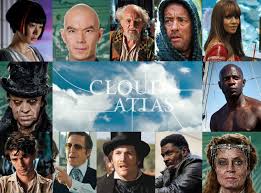 After a fortnight's dearth of new films I'd been rather hoping that my first experience on return would be something special - and, very happily, it most emphatically was!

I first read David Mitchell's renowned novel two years ago. (It had been short-listed for the 2004 Man Booker prize). Consisting of half a dozen tales, each set in a different period, starting in mid-19th century and ranging up to the 24th century, with connections between them which are both character-wise and manifested in various aspects of the stories. Each segment is given its own style of language and mode of presentation - the latter including first-person narrative in journal form, epistolary format, Q & As as part of an interrogation and third-person espionage-type thriller. Must confess that in my first reading I did find the book perplexing and tough to get through. However, on hearing that it had been filmed, I re-read it recently - and this time did find it quite an astonishing achievement.

The book arranges its parts starting with the earliest in time, then going forward in leaps until the central, most-futuristic episode, then retreats in reverse order, ending back in the 19th century where it had begun.
The film, quite understandably, doesn't adopt this pattern but has the six tales running linearly in parallel, jumping between them, seemingly randomly, sometimes for quite a few minutes uninterrupted, at other times for just a few seconds, all with no single tale dominating the others. This may sound confusing but I didn't find that at all. It might also sound off-puttingly heavy, but in both book and film, at least one of the segments is very funny indeed.

As if to underline the connections between the stories, all the major actors (among them Tom Hanks, Halle Berry, Hugh Grant, Hugo Weaving, Jim Broadbent, Susan Sarandon) take on multiple roles, each appearing in several of the stories, sometimes close to unrecognisable, and even gender-crossing for some. One really ought to sit and wait for the final credits to find out which ones you will almost certainly not have spotted, some of which made my jaw drop! Great fun! (The last film I remember which employed this feature to a significant extent was Lindsay Anderson's excellent 1973 film 'O Lucky Man' - but 'Cloud Atlas' goes way beyond that in this particular respect. Incidentally, both films are also almost exactly the same length, at just under three hours - though neither of them feel like it).

It had crossed my mind as to whether I would have enjoyed this film as much as I did if I hadn't known the book. At first I thought I might have gone with a positive bias, but then recalled several very favourable reviews I've seen or heard where the person had not been familiar with the novel and were likewise impressed.

In sum, I found this the single most satisfying film I've seen in a very long time - challenging, thrilling, sad, thought-provoking, funny, intriguing, philosophic - you name it, it's all here. So, not for nothing I'm going to award 'Cloud Atlas' a rating I haven't given to any film since I started reviewing on these blogs. An extraordinary film like this deserves an extraordinary score:- 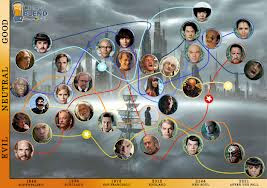