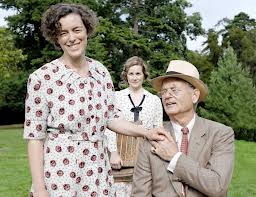 Based on the diaries of Daisy, the real life (several-times- removed) cousin of President Franklin D. Roosevelt, I found this film a disappointingly mundane affair.

Taking place in 1939, Daisy becomes, to her consternation, the object of infatuation - and wandering hands - of the married FDR. (Ooh, the randy devil!) The entire dramatic momentum of the film is provided by the conflicted emotions of Daisy, played by the excellent Laura Linney, almost all the time in sullen mood, reflecting her confusion at being given such unexpected and unwanted attentions. Bill Murray as the Pres is okay.

The film starts in pleasant enough and gentle style but I felt it translating into sluggishness quite soon.   I didn't think the script was especially memorable or noteworthy.
Comic relief is presented in the forms of Samuel West and Olivia Colman as the stammering King George VI and Queen Elizabeth (the later-to-become 'Queen Mother', of course). Both resemble nothing like the real royal couple they impersonate, the former especially looking even less like 'Bertie' did than Colin Firth, appearing in 'The King's Speech'. The regularly interspersed  'humorous' scenes featuring this couple relate to their gaucheness, discomfort and ignorance in the unfamiliar milieu of American society (on the first ever visit by a reigning British monarch) - as exemplified in the oft-mentioned 'hot dogs'. (Actually, I don't think I myself knew what this 'snack' was until the 1960s.)

Btw: A film cliche is unimaginatively included. When a character says that s/he doesn't smoke, you can guarantee that before long you will see them puffing away with gay abandon. Oh dear!