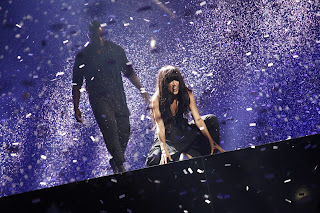 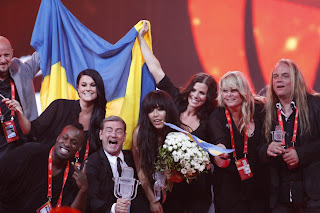 Once again the winner was a song and act for which I just cannot fathom the reason why it won. But win it did - and a runaway victory too, given maximum points by the majority of the 42 participating countries.
The singer, Loreen, with her song 'Euphoria', sounding every bit the electro-pop we heard so much of in the early 1980s, wasn't exactly bad, but I would have placed it in about 10th place out of the 26 finalists. I'm a great fan of retro-pop, but if attempted in an after-era it's got to be done with a twinkle and a wink. It's killed by over-earnestness as, in my opinion, this was. However, it has already been a big hit in a great part of Europe so what do I know?

My own telephone-vote was for Italy - an up-beat Amy Winehouse/Lily Allen-type number with a conspicuous nod to jazz. It came 10th. My second choice would have been Moldova (actually coming 11th) and then my number three, Malta, to my intense displeasure, only finished 21st!


And the British entry, sung by 'The Hump'? It came second from last, just above Norway. I thought it deserved better but it was stymied from the start by drawing the short straw and having to appear first. I won't row back from my opinion that it had a fair chance of even winning, or at least of getting a good position. I still maintain it was a brave and imaginative choice of singer. It ought to have come in the top half at least, I reckon. But still, we did better than in some recent years. In 3 of the last 10 contests we have actually come last!
Anyway, it's some relief that it's now all over - and next year we will have it coming from a much less contentious location.

Now better get down to those film blogs again. I've got quite a number to write about.
Posted by Raybeard at 23:21