Why do false memories get to be so hard-wired? 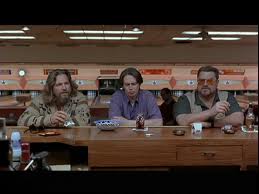 I don't think I'd be a reliable witness to a crime or an accident taking place right in front of me. I wonder if many others feel the same way.
A couple of nights ago I watched 'The Big Lebowski' (left) for what must be the seventh or eight time. (One of my very favourite films of recent years - surely counting among the Coen brothers' very best to date.) Yet, as in other films which I re-watch, there were so many points where I was mistaken in what I thought had been the actual dialogue, as well as being in error in my recalling the visuals of certain scenes. I find this curious phenomenon in nearly all films which I watch for a second time or more. It usually takes until about the twentieth time of watching for my mind to stop resisting and to give in to mentally recording what was actually the 'truth'. In my case it's films like 'Gone with the Wind', 'Citizen Kane' and '2001 - A Space Odyssey' (which just happen to be my all-time favourite films) where my visual and aural memories have eventually gotten into sync with reality. But why does it take so long? I'd be willing to bet that my own mind is not so unusual in this.
So if this is the situation in cases where all one's attention is fixed on what one is watching and listening to, (and with minimal distraction, hopefully), how about witnessing real life incidents  which just happen to occur unexpectedly? How can one reasonably expect to recall with accuracy such events - and give true descriptions of those involved? But, furthermore, why on earth does the mind do this? Does it serve some purpose? It's not as though one's recollection has to be 'softened' as a means of self-protection to make the recollection any more comfortable (though it might indeed be that in certain circumstances). But in witnessing a harmless film, even if it's a comedy, why does the mind keep adjusting or distorting things? There must be some reason behind it - but for the moment it beats me.

Further thought added on following day:-
I know that training in observation is (or used to be) given in the Scouts (presumably also in the Guides) - and, importantly, in the armed forces rigorous practice in acute and accurate observation and recollection is done for what might become life-and-death situations. I assume that when one has undergone such training it remains for the rest of one's life. Those of us who have not received this privilege must necessarily stumble on through our days with all the vagaries to which our undisciplined minds are subject.
Posted by Raybeard at 07:51