Won't bore the pants off you - so skipping details, I'm back for a while using temporary keyboard until shop gets new missing part. Then on its arrival shouldn't take long to fix. So enough of that!
Thanks for all the messages on my last two posts which I hadn't seen until this morning. All are now acknowledged and/or responded to. 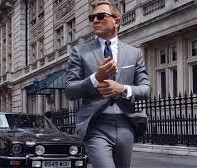 NO TIME TO DIE

I'll keep this more brief than some I've done.

My first cinema visit in over a year, and this I just had to see - though it turned out not really to be what I'd been hoping for to mark Mr Craig's swan-song appearance as 007.

For a kick-off I found the film far too long - by at least a half of its close on three-hour length - to sustain a keen interest in its extended stay, well mine at least. And such a convoluted plot too, needlessly so - SMERSH organising blood injections and DNA manipulations for the entire global population from a Japanese island whilst establishing a 'poison garden' - surely a none-too-subtle nod to 'You Only Live Twice', the original Ian Fleming novel, not the film - but why?  Oh, please give me a simple. old-fashioned, blow-up-the-world, nuclear bomb, something we can all understand, even if we now yawn at it! But that's probably too passe for today's audiences.

Rami Malek, as this meandering tale's arch-villain-in-chief is just adequate in the role, though no more borderline scary than most of Bond's weaker adversaries of the past. Malek sports facial pockmarks and grazes to indicate to us that he's a real bad 'un, a pukka swine! But this actor himself being so young, seems to lack the unquestionable authority which marked out other more memorable villains in the series. I just couldn't see him as the biggest threat the world has ever faced. Christoph Waltz in a one-scene reprise appearance is much more impressively menacing and authoritative. Having said that, Malek's character really does display a hideously vicious level of nastiness well worthy of such a contemptible figure.

I thought the introduction of a female 007 (Lashana Lynch)  to replace Bond when his disappearance at the start of the film had led to the assumption by 'M' (Ralph Fiennes once more) that he must be deceased, hopelessly unconvincing. Aside from some efficient swimming and being able to ride a motorcycle in a chase with Bond hanging on to dear life as pillion passenger, she didn't seem to possess the exceptional survival skills which had marked Bond out sufficiently to merit his inclusion in the '00' licence-to-kill category.

This is the most episodically stop-start-stop-start and relentlessly serious of all twenty-five films in the series, practically devoid of all humour, though the odd 'aside' might just be caught by perceptive ears, including from Ben Wishaw again as 'Q', in that role's most substantial contribution yet.

I've already mentioned the allusion to one of Fleming's original novels. There are a couple of more direct references, aural ones including over the closing credits, to a certain eartier Bond film, in my books easily one of the best ones, if not the best - despite having one glaring 'thumbs-down'!

This is only the second film from director Cary Joji Fukunaga which I've seen, the other being his 'Jane Eyre' of ten years ago with which I had been mightily impressed, awarding it a rare for me rating of '8'. I rather think he's hit the buffers with this latest of his.

The reviews of 'No Time' which I've seen have been overwhelmingly positive, many of them giving it their maximum number of stars. Fair enough, even if I beg to differ greatly. I thought that over his five Bond outings, Daniel Craig has made a highly admirable Bond. all his films bar one deserving a second viewing, or even more - that is all except this very one, which left me, quite uniquely for a Bond film, with a nasty taste in the mouth...................5/10.

If I do disappear again in the next few days it shouldn't be for too long. Now I really must go and start catching up on all other blog-pals' postings I've missed.