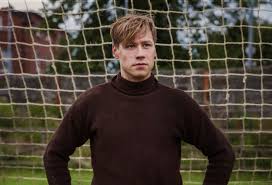 Here's yet another film I would have allowed to pass were it not that I'm still trying to make a dash for the 'finish line' of 5,000 films, and anyway it now being the school hols there's precious little else on right now which seems deserving of the expense and effort. It transpired, though, that given the (to me) uninspiring subject matter - football - this might have been considerably worse than it was.

The name of Bert Trautmann remains familiar to me because it was in my pre-teen years (mid-1950s) that he was oft talked of in glowing terms by my soccer-mad brothers. I retain the fact that he was a renowned and internationally acclaimed goalkeeper of great distinction, though which team he played for I couldn't have said. Still less did I know that not only was he German, but he'd actually fought on the Nazi side until captured in early 1946 - and was held at a prisoner-of-war camp in Lancashire until his talent as player was spotted and he was let out to play in a local team then returned to incarceration - eventually being signed up in 1949 to play as goalie in the top division for none other than Manchester City.

The rather likeable German actor David Kross plays the title character in this largely German production (99% in English), which starts at the end of WWII and follows his 'discovery' as a footballing marvel, from where his career takes off, very gradually at first, then right up to his playing in the 1956 FA Cup Final at Wembley when he suffered a broken neck yet continued to play on heroically in indescribable agony, ensuring his team's victory of 3-1 against Birmingham City. But what I was completely oblivious about, then being but a young boy myself, was the hostility he received from all directions right through almost until that Wembley game, because of his invidious war record, which he tried to play down ("I had no choice!") though he did carry a particular baggage (or two) of guilt through certain of his experiences.
When he became a national figure so did the outcry about his allowing to participate at all become a nationwide clamour, fed by media hostility whipping up unforgiving anti-German sentiment. Some scenes illustrating this really did make me cringe, though in the post-war climate of the time such might be considered as more understandable than had war been not so recent.

While he still plays for the local team Trautmann falls for the daughter (Freya Mavor) of the local team manager (John Henshaw) who'd spotted him, her initial cold, even hostile, responses (she having lost relatives in the war) finally melting until he marries her, yet still not telling his bride the full story of his war-service.
It was when he was in hospital recovering from his broken neck injury that he undergoes a family tragedy which marks both him and his wife for life.

I really didn't think I was going to like this at all. The very fact that I quite did so means that real addicts of the game are likely to get more out of it even than I did.
Bavarian director Marcus Rosenmuller doesn't hold back in depicting nasty aspects of Trautmann's fellow Germans in the war as well as the anti-German British sentiments in the decade following the war's end. He does manage to play it all quite even-handedly in a film which gallops along with very few 'boring bits'. However, maybe two hours is stretching it a bit, though even so I got the feeling that more was being left out rather than an excessive amount being put in.
I was surprised to find out that Trautmann himself died only six years ago at the age of 89.