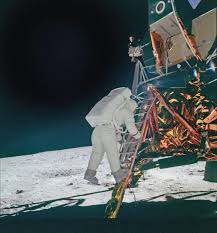 In other circumstances I would have given this a miss because, although I'm an Astronomy nerd and have been since a boy of nine (yes, I can date it that precisely, almost down to the actual day) I've really had more than my fill of programmes celebrating the event of 50 years ago this very day, having watched the landing live at my then age of 22, and seen so many replays of that truly momentous event over the decades that I've long since found the subject positively boring. I often still think that if I have to once more watch that "One small step for man......." clip I'll go mad! (It is, of course featured here too - but how could it not be?)
But this was also an opportunity to try to wash away some of the diabolical effect of the cinematic experience I had four days ago, which was the subject of my previous posting. To expunge the memory entirely would be my earnest wish - it's still making mental waves in me (waves, note, not ripples!) both day and night - but as that's not going to be possible, I hope that this might at least dilute the horrible recollection of it.

This film was much better than I thought it would be, with many as-it-happens shots I'd not seen before - and nor had most people it seems. It moves along at snappy pace, much of the 8-day mission telescoped considerably into digestible, yet flowing, segments, such that its 90-odd minutes fly by. Without complex scientific explanations, and with little pre-mission talk, it focuses on the visuals as well as personal interchanges of the crew of Aldrin, Armstrong and Collins with Houston control - and the entirely male team of scientists and operatives on the ground, at least I didn't see one single female among them (I believe this has been significantly 'corrected' since that time). The un-narrated film manages to be both moving and exciting despite our knowing what happens. The film footage is quite magnificent and I wish there'd be a convenient chance here to have watched it on IMAX screen.

Director Todd Douglas Miller has done a sterling job and this is a first class and convenient encapsulation of that wondrous venture............7.