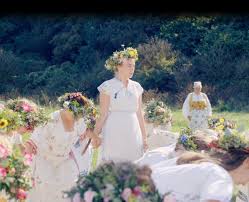 Every so often a film comes along of such disturbing effect that it shakes you to the core. Such was this for me - and I never want to see another which does the like. I'm sure there'd be those who can laugh it off and forget it. Lucky them, I say! For me, nightmare material!


So where to begin?
I'll just set up the situation and say no more. Four American friends, including the only female (Florence Pugh) who has just lost her parents and tags along half-heartedly, fly to northern Sweden (though shot in Hungary) to visit a rural community, perhaps 70-80 strong, celebrating the Summer solstice in 'Midnight Sun' land where one of their brothers is a member. Everyone permanently dresses in white - dresses, robes etc, sometimes bedecked with flowers - and they engage in various rituals, occasionally involving singing and dancing. Communal meals are strictly programmed. At first this visiting group are just spectators, but they get drawn in and at least two of them get involved in serious infractions of the community rules, with consequences which are only fully horrifically demonstrated in the closing scenes. Can't go further - and anyway, I don't want to think about it.

There are clear resonances with the 1973 film 'The Wicker Man' which soon became and remains a cult favourite. (I saw that film in the days when there were two films on the programme, and it was the supporting film to the deservedly highly regarded 'Don't Look Now').
But this present film takes it well beyond 'Wicker Man' level - with several grisly and very powerful shocks, both unexpected and those you can see coming, yet I just had to keep my eyes on the screen, it really was that compelling, dammit!
There is, by the way, one particular bizarre episode (in an entire film of 'bizarres') approaching the conclusion which raised more than a few sniggers in the audience. But the building up of tension throughout the film was, I must admit, quite masterful - leading up to a predictably horrifying climax.

Words are not coming easy and I don't want to spoil things for anyone reading this and yet dares to see it, though everyone's reaction varies such that the effect it had on me won't be shared by others who do venture towards it. It really got under my skin.

Director (and writer) is Ari Aster who was also responsible for the generally highly praised 'Hereditary' of last year for which I didn't much care. In my view 'Midsommar' is a much more 'successful' feature, if I may use that word.

To do my duty in awarding this a rating I've got to take a deep breath and stand back, judging what I've just seen as dispassionately as I can manage, though that is being a huge task. Okay, just to get it over with, and wishing I could scrub this infernal experience from my trembling memory...................7.