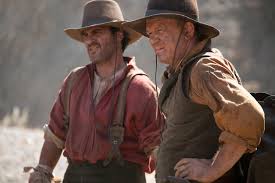 I'm in a quandary as to which side to come down on, a deeply unpleasant experience which has seared itself on my memory when I wish it hadn't, yet a film I can recognise as being significantly superior within the 'Westerns' genre .

1853, starting in Oregon. The titular siblings, having the most unlikely surname of 'Sisters' (played by Joaquin Phoenix and John C. Reilly) are a pair of bickering professional assassins in pursuit of a gold prospector (British actor, Riz Ahmed - most impressive - and eye-catching!) whose travelling companion (Jake Gyllenhal) is, unbeknownst to the former, a private investigator keeping tabs on him while trying to let their pursuers know their shifting location towards and into California. I can't say much more about the story as there are a number of unexpected turns, usually violent, wrong-footing our expectations. Sometimes I had the impression that the director/writer is 'playing' with us.

Numerous scenes of brutal violence and revulsion, some clearly intending to be comic though I found very little to laugh at, with some alarming episodes involving horses which, even if as surely they do, come under the qualification of "no animals were harmed", I found thoroughly upsetting - and a greater distraction for me than it would be for, probably, the majority of audiences. And I'll be carrying the memory of a certain spider episode for my remaining life! If you like your films to be 'strong' with a visceral kick, this is made for you.

It's not a film I'll ever see again (thank God!), lying in the same category as something like, say, 'Apocalypse Now' which I only ever saw on its initial release 40 years ago, yet as images from it haunt me still, so will it be with this.

Director Jaques Audiard ('Rust and Bone' 2012) undoubtedly knows what he's doing, shaking us out of sitting there in complacency, but I'd hesitate to claim this film as being anywhere near a 'masterpiece'.
'A Clockwork Orange', just as violent, and which I have seen multiple times and will continue doing so, does qualify as a masterpiece. The genius of Kubrick, evident in every one of his films in fact, presents us with scenes (including violent ones as in 'Orange' - and 'Full Metal Jacket') with an artifice where one was always aware of a towering mind at work behind the camera and thus distancing the subject matter being portrayed, making it more acceptable to witness as 'entertainment'. (Hitchcock films are similar in that respect). I'd not put Audiard in anything like the same class. But, to be fair, what he aims at he achieves, and that ultimately, is what matters.

Strong stuff, then - and definitely not one for the faint-hearted and sensitive. As I say at the top, I'm not sure which way to land on this one. In terms of my own 'enjoyment' I'd rate it on the low side as there was precious little of that emotion. But ultimately I do appreciate it as a genuinely well-made film, perfectly constructed and very fine acting in every case of the four principals.
When it's a question of head v. heart, usually the best advice is to go with the latter. However, in this case I think I'll have to come down on the other side, even though I may shortly be regretting it. So it's a.............7.5.