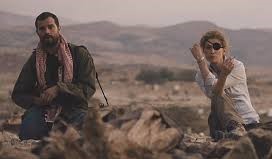 Intense, often gruelling, depiction of the final few years of Sunday Times war correspondent Marie Colvin who's ever brushing aside advice not to go to certain scenes of conflict as being too risky. She travels to a number of world hot spots, starting in Sri Lanka 2001 (where she loses an eye) then to Iraq, Libya and finally Syria where she was killed in 2011. Some of you will recall the mention on news programmes. There are many bloody scenes, as you might imagine, yet I did find there an unexpected distance between the showing of such horrible, violent events and my reaction to them. I didn't feel drawn in and being involved as much as I felt the story merited.

Oscar-nominated Rosamund Pike throws entire conviction into playing the ill-fated, superficially unlikeable journalist, showing her as having problems with drink, with relationships, and with her mental health, but feeling her mission is to tell the world the truth of what was happening to innocent civilians contrasting with the propaganda of Islamic terrorists as well as that of Gaddafi, and Assad.
Jamie Dornan is her intrepid, equally committed,  Irish photographer and companion on all her missions.
Tom Hollander is the newspaper editor and, also in a few London scenes to where she returns every so often, is her final love interest in the person of a little-used Stanley Tucci.

This is Matthew Heineman's first feature length film after some TV work. I think it's a fair enough workaday product but one of no particular distinction. I can't see myself remembering it for as long as I should, considering the horrors of the well-documented background to a story which needs telling. Nevertheless, if it raises the topic to a general people's awareness it will have done its job..........6.