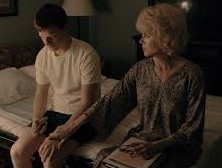 Had to suspend my own rule of not being out after dark to get to this 'must-see' film -  leaving at dusk and returning at my bed-time. Turned out to be a good decision.

The second film within twelve months (following 'The Miseducation of Cameron Post') on the subject of religious 'gay conversion therapy', this has had generally fairly positive reviews but more than once I've seen unfavourable comparisons with the earlier film. I'm not so sure such 'criticism' bears out.

Set in recent past (and filmed in Atlanta, Georgia) it's directed and written by Joel Edgerton in only his second feature film as director (based on memoir of actual experiences by Garrard Conley), Edgerton himself takes the frighteningly credible major role of 'conversion centre' chief to which the teenage Lucas Hedges ('Three Billboards', 'Manchester by the Sea') is sent by his parents after their son has been 'outed' to them, he willingly agreeing. The father (Russell Crowe) is a firm but soft-spoken Baptist pastor and his wife (Nicole Kidman - in startling bouffant wig!) devotedly religious though superficially sympathetic. Both Crowe and Kidman are quite superb, convincingly skirting round the topic while hardly daring to directly confront their son - except when his father does one time ask outright "Are you homosexual?"
At the institute there are about a dozen or more new 'entrants' with various 'problems' as perceived, of which being gay is the most prominent. Regime is strict, possessions removed, all communications supervised and monitored - with regular open confessions of 'sinfulness' to the group, with details demanded by the martinet of a facilitator which Edgerton plays. The son is not totally isolated, however, with him able to spend some nights in a hotel with his mother, though forbidden to divulge details of his 'treatment'.

The requirements of the institute and its treatment of its 'inmates' made me progressively angrier. Often the way a film is made will exasperate me and get my ire up, but here the subject matter itself was the explosive issue which raised my temper. We must assume that the methods of attempted 'conversion' depicted here are reasonably accurate and if so, one can only wonder how they are still allowed to be practised. (Unlike in Germany, where 'conversion therapy' has recently been outlawed nationally. despite the British government pledging last year to do the same, it yet remains a promise unfulfilled. In America, one can only hope that Veep Pence, ardent supporter of such harmful and ineffective devices, will see this film, though it's unlikely that he would - and even if he did I fear it wouldn't make any difference to him.)

This present film, unlike the earlier 'Cameron Post', did get a strong visceral response of outrage in me, even though I found it easier to relate to the characters in the other, notwithstanding the fact that Cameron Post was a young lesbian. However, I did dock a half-point from my rating for 'Post' for the too prevalent inaudible mumblings of the main star. In this one there was a bit of that same fault from the young Hedges (not from the three main adults, however), so when it comes down to it I'm pleased to adorn 'Boy Erased' with an untrimmed..................7.